To determine the characteristics associated with cancer survivors which indicate continued cigarette smoking at or around the time of cancer diagnosis.

A total of 631 survivors were recruited in four cancer centers in Memphis, TN, between March 2015 and June 2016. To increase the probability of accurate reporting, surveys were conducted anonymously. A total of 112 respondents reported they were current smokers and 202 reported they were former smokers (n = 314), who comprised the sample.

We found that the rate of daily e-cigarette use among cancer survivors who smoked was 15.2% versus 3.9% in cancer survivors who no longer smoked. The national rate of adult e-cigarette use is 3.5%. Multivariate models correlated the characteristics of current versus former smokers and revealed that increasing age (aOR = 0.97, p < .0001), decreasing education (aOR = 2.39, p < .02), and current use of e-cigarettes (aOR = 3.74, p < .00045) were frequently associated with current cigarette smoking.

Among cancer survivors who continue to smoke after a cancer diagnosis, use of e-cigarettes is highly prevalent; research is needed to determine whether use of e-cigarettes promotes, has no effect, or hinders smoking cessation efforts among this vulnerable population. 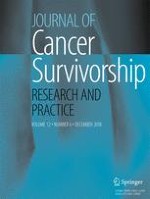 Quality of diabetes care in breast, colorectal, and prostate cancer

A smoking cessation and pain management program for cancer survivors