To investigate the correlation of anterior overbite with the sagittal root position (SRP) and buccal bone thickness (BBT) of the maxillary anterior teeth.

Cone-beam computed tomography (CBCT) data of southern Chinese patients who underwent CBCT examinations between November 2016 and December 2016 were collected. The anterior overbite was the predictor variable while the SRP and the BBT at 4 mm apical to the cementoenamel junction (CEJ-4) and midpoint of the root of the maxillary anterior teeth were set as the primary and secondary outcome variables, respectively. All measurements were done by two calibrated examiners. Correlations between variables were analyzed by the Spearman’s correlation coefficient. The significance level was set at P < 0.05. 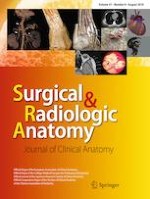 Anatomical variability of the arcuate fasciculus: a systematical review

Effect of mastoid bone pneumatization on the conformation and depth of the sinus tympani, a high-resolution computed tomography study

Supernumerary incisive canals in a cadaver: a rare anatomical variation