High resolution MR imaging was performed on a 1.5 T magnet using a dedicated extremity-coil in ten left and ten right knee joints of 20 volunteers (10 male, 10 female, mean age 25 years) with no history of knee abnormalities. Continuous axial T2-weighted MR images perpendicular to the longitudinal axis of the ACL were acquired. Cross-sectional areas of the ACL midsubstance at the contact area to the posterior cruciate ligament were measured. For imaging and evaluation of the osseous limits of the intercondylar notch a 3D-dataset of the knee was acquired. Anterior, middle and posterior planes of the intercondylar notch were calculated and analyzed for measurement of the notch area AN and notch width index NWI. The ratio of the ACL cross-sectional area of the ACL and the cross-sectional area of the notch was defined as the ACL notch index (ANI) and used as a standardized tool for evaluation. For statistical evaluation, linear regression analysis was performed. Mean values between male and female were compared using a t test. In addition, five matched pairs of male and female volunteers of same height were analyzed.

The smaller the intercondylar notch the smaller the cross-sectional area of the ACL midsubstance. In addition to the impingement of the ACL at the anterior and posterior roof of the notch, a biomechanically weaker ACL may be the reason for disposition to an ACL rupture in patients with a small intercondylar notch. Women have a thinner ACL midsubstance than men of the same height which may be one of the critical etiologic factors that predispose women to an ACL rupture. 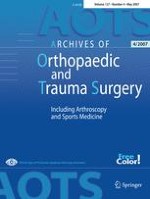 The anterior approach for the treatment of posterior osteochondral lesions of the talus: comparison of different surgical techniques