This study analyzed the Quality of Life (QoL) and cost-effectiveness of laparoscopic (LDP) versus robotic distal pancreatectomy (RDP).

All patients who underwent LDP or RDP from 2011 to 2017 and with a minimum postoperative follow-up of 12 months were included in the study. To minimize bias, a propensity score-matched analysis (1:2) was performed. Two different questionnaires (EORTC QLQ-C30 and EQ-5D) were completed by the patients. The mean differential cost and mean differential Quality Adjusted Life Years (QALY) were calculated and plotted on a cost-utility plane.

The study population consisted of 152 patients. After having applied the propensity score matching, the final population included 103 patients divided into RDP group (n = 37, 36%) and LDP (n = 66, 64%). No differences were found between groups regarding the baseline, intraoperative, postoperative, and pathological variables (p > 0.05). The QoL analysis showed a significant improvement in the RDP group on the postoperative social function, nausea, vomiting, and financial status (p = 0.010, p = 0.050, and p = 0.030, respectively). As expected, the crude costs analysis confirmed that RDP was more expensive than LDP (12,053 Euros vs. 5519 Euros, p < 0.001). However, the robotic approach had a higher probability of being more cost-effective than the laparoscopic procedure when a willingness to pay of more than 4800 Euros/QALY was accepted.

RDP was associated with QoL improvement in specific domains. Crude costs were higher relative to LDP. Cost-effectiveness threshold resulted to be 4800 euros/QALY. The increasing worldwide diffusion of the robotic technology, with easier access and possible cost reduction, could increase the sustainability of this procedure. 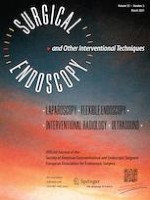 Video consultation during follow up care: effect on quality of care and patient- and provider attitude in patients with colorectal cancer