To estimate the societal costs of low back pain with/without radiating leg pain (LBP). LBP is a major burden in terms of both personal suffering and societal costs.

Patients visiting healthcare providers with a LBP-diagnosis in the Western region of Sweden (Västra Götaland) in 2008–2011 were identified in national registers and an administrative patient database. Direct healthcare costs and indirect costs in terms of sick leave and early retirement were summarized over time periods called LBP episodes, starting with a LBP-related healthcare contact or work absence due to LBP and ended when 6 months had elapsed without any LBP-related healthcare contact or work absence.

LBP has an apparent impact on the overall resource use and work loss. The results indicate that there is a high short-term cost increase at the beginning of an LBP episode, but also that the costs decrease in the long term after the LBP symptoms have come to clinical attention. 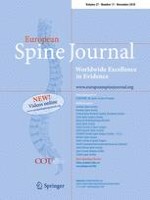 Validation of the Croatian version of the Oswestry Disability Index

The prevalence of chronic low back pain and lumbar deformities in patients with Parkinson’s disease: implications on spinal surgery