LEADER was a double-blind, multicentre, placebo-controlled trial that found that liraglutide significantly reduced the risk of MACE compared with the placebo. In this post hoc analysis, we explored, in all LEADER participants, whether the annual rate of NSHEs (defined as self-measured plasma glucose <3.1 mmol/l [56 mg/dl]) was associated with time to first severe hypoglycaemic episode (defined as an episode requiring the assistance of another person), time to first MACE, time to cardiovascular death and time to all-cause mortality. Participants with <2 NSHEs per year were used as reference for HR estimates. Cox regression with a time-varying covariate was used.

The analysis of data from the LEADER trial demonstrated that higher rates of NSHEs were associated with both a higher risk of severe hypoglycaemia and adverse cardiovascular outcomes in individuals with type 2 diabetes. Therefore, irrespective of the cause of this association, it is important that individuals with high rates of hypoglycaemia are identified so that the potentially increased risk of cardiovascular events can be managed and steps can be taken to reduce NSHEs.

Study design and participants
The post hoc analyses described below utilised data from the LEADER trial (NCT01179048). Detailed descriptions of the protocol, methods and primary results have been published previously [28, 29]. In brief, LEADER was a double-blind, multicentre, placebo-controlled trial that included 9340 participants with uncontrolled type 2 diabetes (HbA1c ≥ 53 mmol/mol [7%]) either ≥50 years old with pre-existing CVD (81%), or ≥60 years old with at least one cardiovascular risk factor (19%), as determined by the investigator. Participants were randomised 1:1 to receive either 1.8 mg (or the maximum tolerated dose) of liraglutide or a matching placebo once daily in addition to standard of care. Those that did not meet their target for glycaemic control (HbA1c ≤ 53 mmol/mol [7%] or an individualised target) after randomisation could receive additional antihyperglycaemic agents (excluding glucagon-like peptide-1 [GLP-1] receptor agonists, dipeptidyl peptidase-4 [DPP-4] inhibitors or pramlintide) to their treatment.
Participants measured and recorded plasma glucose during the trial using a single type of protocol-defined blood glucose meter supplied by the study sponsor, along with instructions for self-measurement of fasting glucose, at local investigators’ discretion. Glycaemic management was guided by review of self-measured plasma glucose (SMPG) values and HbA1c levels for the individual participants.
Participants provided written consent, which was approved according to local regulations by appropriate health authorities, and by an independent ethics committee/institutional review board. The trial was conducted in accordance with the Declaration of Helsinki, ICH Good Clinical Practice and FDA 21 CFR 312.120 in the USA.
Outcomes
In this post hoc analysis, we explored the possibility of annual rate of NSHEs being associated with time to first severe hypoglycaemic episode, time to first MACE, time to cardiovascular death and time to all-cause mortality. An NSHE was defined as SMPG <3.1 mmol/l (56 mg/dl), and severe hypoglycaemia defined as an episode requiring assistance of another person to actively administer carbohydrate or glucagon, or to take other corrective action [6]. MACE was a composite of cardiovascular death, non-fatal myocardial infarction and non-fatal stroke (three-point MACE), all of which were adjudicated in an independent and blinded manner by external event-adjudication committees. During the total trial period of 35,563 patient years of observation (median follow-up of 3.8 years), 27,933 NSHEs were registered. There were 433 severe hypoglycaemic episodes, 1302 first cases of three-point MACE, 497 cases of cardiovascular death and 828 cases of all-cause mortality [28].
Statistical analyses
Data were analysed using a Cox proportional hazards model and the annual rate of NSHEs was modelled in a similar way to a previous study [26], as a time-dependent covariate with three levels: Group A: <2 NSHEs per year (reference group); Group B: 2–11 NSHEs per year; Group C: ≥12 NSHEs per year. All analyses consider time to first event.
The reference group comprised individuals with non-frequent, non-severe hypoglycaemia (defined as <2 episodes per year), and those with no reported NSHEs, based on the assumption that these two groups of patients could be combined.
Associations between annualised NSHEs and time to first event were analysed using Cox proportional hazards regression with minor hypoglycaemia rate. Minor hypoglycaemia refers to any NSHE (symptomatic or asymptomatic) with an SMPG measurement <3.1 mmol/l (56 mg/dl) as a time-dependent covariate and using a fixed-window approach where follow-up time was divided into 100-day windows [30, 31]. Analyses were made using an unadjusted model, and two models that adjusted for baseline characteristics. The first adjusted model accounted for age, sex, baseline HbA1c and diabetes duration (≥15 years, yes/no). The second adjusted model accounted for renal function in addition to the other characteristics described above, classifying participants according to eGFR as normal (≥90 ml/min), mild impairment (<90–60 ml/min), moderate impairment (<60–30 ml/min) or severe impairment (<30 ml/min). HRs and 95% CIs for the associations of minor hypoglycaemia rate and time to first event were reported.
Anzeige
Three major sensitivity analyses were performed. The first was similar to the main analysis, except that the time-dependent covariate was updated each time a new severe hypoglycaemia event, MACE, cardiovascular death or overall death occurred, depending on the specific analysis, and was not baseline-adjusted. In the second sensitivity analysis, the first year of follow-up was used to classify participants according to their minor hypoglycaemia rate, and time to first event in the analysis was based on the remaining follow-up time (>1 year). Individuals with less than 1 year of follow-up were excluded from this analysis. Finally, in a third sensitivity analysis on MACE and cardiovascular death, all participants who had one or more severe hypoglycaemic episodes during follow-up were excluded from the analysis.
Finally, the data were analysed adjusted for insulin use (baseline or during trial, yes/no), and then analysed using a more stringent NSHE reference category of zero NSHE events: Group A: no NSHEs; Group B: >0 to <12 NSHEs; Group C: ≥12 NSHEs.

The authors thank all those who participated in the original LEADER trial. Medical writing support for the development of this manuscript, under the direction of the authors, was provided by K. Guest, J. Sawyers and C. Lowe of Ashfield MedComms, an Ashfield Health company, and funded by Novo Nordisk. Parts of this study were presented as a poster presentation at the ADA 79th Annual Scientific Sessions, 7–11 June 2019, San Francisco, California, USA.

SH has served on speaker panels for MSD, Eli Lilly, Takeda, Novo Nordisk and AstraZeneca, for which he has received remuneration. He has served on advisory panels or as a consultant for Zealand, UNEEG Medical, Boehringer Ingelheim, Novo Nordisk, Eli Lilly and Takeda, for which his institution has received remuneration. LW, MSG and LL are employees of Novo Nordisk and LL owns shares in the company. AI declares that there are no relationships or activities that might bias, or be perceived to bias, his work.
Open Access This article is licensed under a Creative Commons Attribution 4.0 International License, which permits use, sharing, adaptation, distribution and reproduction in any medium or format, as long as you give appropriate credit to the original author(s) and the source, provide a link to the Creative Commons licence, and indicate if changes were made. The images or other third party material in this article are included in the article's Creative Commons licence, unless indicated otherwise in a credit line to the material. If material is not included in the article's Creative Commons licence and your intended use is not permitted by statutory regulation or exceeds the permitted use, you will need to obtain permission directly from the copyright holder. To view a copy of this licence, visit http://​creativecommons.​org/​licenses/​by/​4.​0/​. 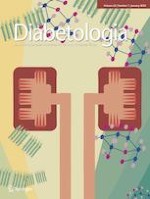 Flash monitor initiation is associated with improvements in HbA1c levels and DKA rates among people with type 1 diabetes in Scotland: a retrospective nationwide observational study