The online version of this article (https://​doi.​org/​10.​1007/​s40121-020-00303-8) contains supplementary material, which is available to authorized users.
David C. Fajgenbaum and Johnson S. Khor contributed equally to this study.

SARS-CoV-2 as well as its related disease, 2019 novel coronavirus (COVID-19), is a global pandemic. Over 2,200,000 cases and 150,000 deaths have been reported to date worldwide [ 1]. With an R 0 reportedly as high as 2–2.5 and a significant case fatality rate, this virus will continue to have a major impact on the health and well-being of humans worldwide.
Anzeige
COVID-19 patients exhibit a highly heterogeneous clinical course from mild flu-like symptoms to cytokine-storm-driven acute respiratory and multi-organ failure [ 2]. Physicians worldwide have administered numerous treatments off-label and through clinical trials to treat COVID-19 patients. Although only four months have elapsed since the emergence of COVID-19, many case reports, single-center series, and interventional studies have been published in medical journals as well as pre-publication archives. Some of these treatments have received widespread attention and are currently undergoing randomized controlled trials while others have not. Identifying and inventorying the full range of treatments reported in use is critical for physicians treating COVID-19. Further indicators of effectiveness among those treatments are important for governments, public health organizations, and pharmaceutical companies identifying and prioritizing treatments for well-controlled clinical trials [ 3]. However, a systematic effort to consolidate and centralize all treatment data is missing.
Our objective was to perform a systematic review to inventory all treatments that have been reported through any study design to be given to COVID-19 patients and to investigate the time to clinically meaningful response among the most frequently administered treatments when sufficient data were available.

We completed our systematic literature review according to the PRISMA guidelines (Supplementary Table 1) [ 4]. We searched PubMed, BioRxiv, MedRxiv, and ChinaXiv from December 1, 2019, to March 27, 2020, using the following terms "COVID19" OR "SARS-CoV-2" OR "2019-nCoV". The search was not restricted to publications in any language as translation tools were used for articles not written in English. However, 22 articles could not be accessed, translated, or interpreted by the extractor. Additional references were identified through bibliography searches and review of articles written by study authors. Inclusion criteria included all studies reporting the use of any treatments in COVID-19 patients. Reasons for exclusion include duplication and lack of information on drug treatments administered to COVID-19 patients. No studies were excluded based on participants, treatments, outcomes, study design, or length of study. Both patient- and summary-level studies were included. Given the urgency and importance of this information, articles deposited into online pre-publication archives were also included. The full text of all articles was reviewed by at least one data extractor to determine if the paper met the inclusion and exclusion criteria. A review protocol can be accessed at  https://​www.​cdcn.​org/​CORONA.

All articles meeting inclusion criteria were read and extracted into a centralized spreadsheet. Elements collected included article type, nationality of the authors, patient disease characteristics, treatments administered, and outcomes, when available. A second individual, either holding a medical degree or currently in medical school, performed an independent review of every article and repeated data extraction for every data point. A third individual (JSK) resolved discrepancies between the two extractors. JSK also reviewed the article list and data extractions to remove duplicates and resolve discrepancies related to study inclusion. Data on all patients with drug treatment information available were included to avoid selective reporting bias within studies, but publication bias is likely present in this study. Data extraction fields are listed in Supplementary Table 2.
Anzeige

Data were analyzed descriptively; no hypothesis tests were performed. Frequency counts and percentages were used to describe categorical data. A weighted mean (standard deviation) was tabulated for continuous data (age, C-reactive protein, time to clinically meaningful response). For summary-level studies that presented continuous data using a median and interquartile range or sample range, sample mean and standard deviation were imputed using the Wan et al. method [ 5]. Data were combined, and an inverse-variance weighted mean was calculated for age and time to clinically meaningful response (TCMR). TCMR was calculated when available at a per-patient and per-drug level and was defined as the shortest duration between drug start and full symptom resolution (according to author) or hospital discharge. When data on both of these time points were provided, the shortest duration was considered as the TCMR. TCMR cannot be conclusively attributed to a given drug, as drugs were included in the calculation regardless of whether they were used alone, concurrently, or sequentially. For the Kaplan-Meier analysis, patients who were not reported to achieve our definition of clinically meaningful response were censored at time to improvement. Treatments were classified according to the Anatomical Therapeutic Classification (ATC) therapeutic subgroup. Analyses were performed using R (version 3.6.0). This article is based on previously conducted studies and does not contain any studies with human participants or animals performed by any of the authors.

We identified and reviewed 2706 papers (PubMed: 1795, Biorxiv: 298, Medrxiv: 591, Chinaxiv: 22). Of those, 2542 were excluded and 164 underwent complete data extraction by two independent extractors (Fig.  1). The studies varied in category from single case reports in pre-publication archives to published randomized controlled trials. There were 155 studies that satisfied inclusion criteria, with 130/155 (83.9%) reported from China and 25 (16.1%) reported from 13 other countries (Afghanistan, France, Germany, Italy, Japan, Korea, Scotland, Singapore, Spain, Taiwan, UK, the USA, and Vietnam). Nine articles were determined not to meet inclusion criteria when re-reviewed by a second extractor. Of the 155 studies, 117 were published in journals indexed on PubMed; the remainder were published in online archives. Studies reviewed included 87 single-patient retrospective case reports, 65 retrospective case series of between 2 and 1099 cases, and 3 interventional clinical trials. Data for 9152 patients were reported, with data reported from 238 patients on an individual patient-level and 8914 patients on a summary level. These data are available in Supplementary Table 3, and an updated COvid-19 Registry of Off-label & New Agents (CORONA) can be accessed at https://​www.​cdcn.​org/​CORONA.
×
Patients included in the analysis are predominantly Chinese (98.4%) (Table 1). The weighted mean patient age was 44.4 (SD 21.0) years, and 45.4% of patients were female. The method of positive COVID-19 testing was reported for 91.3% of patients included in the analysis. Nearly all cases were reported to be hospitalized (98.3%), and 1672 (18.3%) were reported to require ventilation. In 2470 (27.0%) cases, the author described the patient(s) as having “severe” disease.
Table 1
Study populations
Data are mean (SD) or n/ N (%), unless otherwise specified
All patients included in this analysis received at least one treatment intended to treat COVID-19 (Table 1, Supplementary Table 3). Fourteen therapeutic categories comprised a total of 115 reported treatments as well as many non-descript treatments (e.g., “antibiotics not otherwise specified”). Treatments described were administered alone, concurrently, or sequentially with others. Given the nature of the reports, we did not differentiate concurrent or sequential treatment regimens. The most frequently administered classifications of treatments were antivirals ( N = 6547, 71.5%), antibiotics ( N = 4263, 46.6%), and corticosteroids ( N = 2392, 26.1%) (Fig.  2a). The most frequently administered treatment given to all patients was combination lopinavir/ritonavir ( N = 2000, 21.9%), followed by interferon α/β ( N = 1767, 19.3%) and immunoglobulins ( N = 1049, 11.5%) (Fig.  2b, Supplementary Table 4). Of the treatments identified, 100 (86.9%) were administered to < 1% of all patients.
×
On a per drug basis, response data were sparse and were largely only available on the individual patient level (e.g., case study). Six drugs had patient TCMR data from at least ten patients and at least ten studies. From our review, oseltamivir (ten patients from ten studies) was associated with the longest average TCMR of 19.8 (10.62); however, the sample size was too small to perform statistical comparisons between drugs (Table 2, Fig.  3). Interferon-α/β, which had the highest amount of available response data ( N = 107 patients from N = 14 studies), was associated with the shortest weighted TCMR, at mean (SD) 9.9 (2.65). Combination lopinavir/ritonavir included the second most available data ( N = 76 patients from N = 15 studies) and was associated with a TCMR of 11.7 (1.09) days. For these two treatments, we restricted to the studies reporting patient-level observations and plotted a Kaplan-Meier curve for time to clinically meaningful response ( N = 37 observations for interferon-α/β and N = 34 observations for lopinavir/ritonavir) (Supplementary Fig. 1). For both drugs, median TCMR was < 2 weeks.
Table 2
Time to clinically meaningful response for patients on the seven most frequently used drugs (independently or in combination with other treatments)
×
We compiled a framework through which several treatments identified in this study may be exerting their effects based on recent insights into COVID-19 pathogenesis (Fig.  4). SARS-CoV-2 binds to the ACE2 receptor on ciliated bronchial epithelial cells to gain entry into these cells for viral replication and dissemination in the airway [ 6]. Patients with a weakened immune response would be expected to have difficulty controlling COVID-19. Patients with a hyper-immune response experience acute respiratory distress syndrome, septic shock, and multiple organ system failure due to a cytokine storm [ 7]. Treatments used to date have been proposed to work by inhibiting or modulating these viral or host mechanisms [ 8– 11].
×

COVID-19 represents the largest global pandemic and widespread threat to human health in decades. Fortunately, thousands of drugs are available for other indications and can be used off-label immediately. Unfortunately, no central register of all treatments used for COVID-19 exists, so limited data exist on treatment use and activity. Therefore, physicians do not have information on potentially promising treatments and biopharmaceutical companies must make decisions about clinical trials with limited data. We present the first systematic review of treatments used against COVID-19. While the data contained in this study suggest that some drugs may have an effect on treating COVID-19, we strongly encourage clinicians to prescribe treatments based on the results of well-designed randomized controlled trials. This study should serve as an inventory of treatments administered to COVID-19 patients and assist with prioritizing drugs for well-designed randomized controlled trials, having the potential to improve clinical outcomes and reduce the strain on inpatient care in the current pandemic. The importance of these data, heterogeneity of the data, and the time and resources required to perform this study emphasize the urgent need for systematic data collection on off-label and experimental treatments against COVID-19 as well as randomized controlled trials of promising agents. Learning from this experience to inform future pandemics and aid in the discovery of effective treatments for the approximately 7000 diseases without treatments is critically important.

No funding or sponsorship was received for this study or publication of this article. The Rapid Service Fee was funded by the authors. All authors had full access to all the data in the study and had final responsibility for the decision to submit for publication.

All named authors meet the International Committee of Medical Journal Editors (ICMJE) criteria for authorship for this article, take responsibility for the integrity of the work as a whole, and have given their approval for this version to be published.
Anzeige

This article is based on previously conducted studies and does not contain any studies with human participants or animals performed by any of the authors. 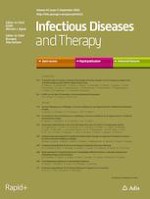 Correction to: Paediatric Recurrent Ear, Nose and Throat Infections and Complications: Can We Do More?

Pulmonary Aspergillosis: An Evolving Challenge for Diagnosis and Treatment

Correction to: A Systematic Review of the Clinical Utility of Cycle Threshold Values in the Context of COVID-19

Challenges to Differente Hepatitis C Genotype 1 and 6: Results from a Field Study in Cambodia