Ultrastructural analysis of autopsy samples from COVID-19 patients usually suffers from significant structural impairment possibly caused by the rather long latency between death of the patient and an appropriate sample fixation. To improve structural preservation of the tissue, we obtained samples from ventilated patients using a trans-bronchial “cryobiopsy” within 30 min after their death and fixed them immediately for electron microscopy. Samples of six COVID-19 patients with a documented histopathology were systematically investigated by thin section electron microscopy. The different samples and areas inspected revealed the ultrastructural correlates of the different phases of diffuse alveolar damage, including detachment of the alveolar epithelium, hyperplasia of type 2 cells, exudates, and accumulation of extracellular material, such as the hyaline membranes and fibrin. Macrophages and neutrophilic granulocytes were regularly detected. Structural integrity of endothelium was intact in regions where the alveolar epithelium was already detached. Aggregates of erythrocytes, leukocytes with fibrin, and thrombocytes were not observed. Coronavirus particles were only found in and around very few cells in one of the six patient samples. The type and origin of these cells could not be assessed although the overall structural preservation of the samples allowed the identification of pulmonary cell types. Hence, the observed alveolar damage is not associated with virus presence or structural impairment due to ongoing replication at later stages of the disease in fatal cases, which implies that the lung damage in these patients is at least propagated by alternative mechanisms, perhaps, an inappropriate immune or stress response.
Begleitmaterial
Supplementary file1 (PDF 14190 KB)
Hinweise

Since the emergence of COVID-19 in late 2019, caused by the severe acute respiratory syndrome coronavirus 2 (SARS-CoV-2) [1], tremendous efforts have been made to understand and to treat this disease [2]. And although approved vaccines reduce virus transmission and a severe outcome of the disease [3], the global pandemic continues to progress, resulting in significant loss of life and the appearance of new SARS-CoV-2 variants of concern. It is therefore still important to improve our understanding of the disease and to develop further preventative and therapeutic strategies.
SARS-CoV-2 infects the epithelium of the upper and lower airways and thereby causes COVID-19 disease [4]. Although the vast majority of COVID-19 patients are asymptomatic or mildly ill (approximately 80%), a still significant subset of patients shows a severe progression of the disease leading to pneumonia which is characterized by hypoxemia [5]. Critical cases (approx. 5%) develop an acute respiratory distress syndrome (ARDS), septic shock, or multiorgan failure [5]. Histopathology of lungs from autopsies has revealed different stages of diffuse alveolar damage (DAD) and severe capillary congestion, microthrombosis, and thrombosis of small to midsized arteries suggesting vascular dysfunction [6]. High quality ultrastructural correlates of the histopathological findings have been demonstrated only sporadically (e.g., by Ochs and colleagues [7]).
Anzeige
More recent histopathology and immunology data suggest that, in addition to direct viral effects, lung lesion in COVID-19 might be driven by the activation and/or an imbalance of the innate immune system [8, 9]. This hypothesis is supported by single cell analysis at the proteome and transcriptome level which demonstrated the association of an upregulation of specific components of the innate immune system in COVID-19 patient cells with pathological lung damage [10‐12]. Accordingly, tissue-based detection of SARS-CoV-2 in multiple organs by immunohistochemistry (IHC) and in situ RNA hybridization (ISH) suggests that viral tissue damage may be a transient phenomenon that is generally not sustained throughout disease progression [13]. However, detection of SARS-CoV-2 by IHC suffers from a low specificity and both, IHC and ISH, only show the presence of protein or RNA but not necessarily of the intact virus, which may lead to misinterpretation of the pathogenesis [14].
Detection of SARS-CoV-2 particles in autopsy material by electron microscopy (EM) could provide direct evidence for the presence of the virus in the cellular context but seems to be challenging because it has led to many misinterpretations, presumably because of the poor preservation of autopsy samples and the difficulty to find and to recognize viral particles in such material [15‐17]. To date, only few papers convincingly demonstrated presence of virus particles in the respiratory system at the ultrastructural level, but all data suffer from a limited structural preservation of the tissue and also a rather small sample size [15, 18, 19]. In summary, the localization of virus particles in patients lung tissue and its relation to the pathological changes of the tissue are largely unknown. Thus, the aim of the present study was to systematically investigate larger parts of well-preserved lung samples by electron microscopy for the ultrastructural correlates of the histopathological findings and for the presence of coronavirus particles. For this purpose, we used lung “cryobiopsies” from a case study of pathologically well-characterized COVID-19 patients [20]. Trans-bronchial “cryobiopsies” were taken within 30 min after exitus of the patients and directly fixed for thin section EM. All samples showed sufficient ultrastructural preservation to identify relevant cell types morphologically, which made it possible to systematically analyze a total section area of at least 10 mm2 taken at regular intervals from a cubic millimeter of each “cryobiopsy” sample. Large-scale tile scans of representative sections were provided as public data sets for further analysis.

Eight patients have been included in a pathological case study on COVID-19 patients in Genoa (Italy) [20]. Samples from six of those patients (patients C03 to C08) were available for an extensive ultrastructural analysis presented here. The patient characteristics and histopathological diagnosis relevant for the study are listed in Suppl. Table 1. Samples were taken by using a trans-bronchial lung cryobiopsy technique within 30 min after exitus of the still ventilated patient [20]. To preserve the tissue for electron microscopy, frozen tissue was immediately immersed in buffered glutaraldehyde (2.5% in 0.1 M cacodylate buffer) and stored for at least 1 week at 4 °C. Control cryobiopsy samples were obtained from then unaffected area of a living patient with nonspecific interstitial pneumonia and fibrosis using the same procedures.

Samples were post-fixed in 1% osmium tetroxide and 1% aqueous uranyl acetate for 1 h, each, dehydrated by a graded series of ethanol and embedded in epoxy resin (Poly-Bed; Polysciences, Inc., Warrington, PA). Sections were produced using ultramicrotomes from Leica, either at 300 to 500 nm (semithin) or at 50 to 100 nm (ultrathin) thickness. Semithin sections were transferred on glass slides and stained with toluidine blue. Ultrathin sections were either collected on naked copper grids and contrasted with uranyl acetate and lead citrate or on small pieces of a silicon wafer and contrasted with lead citrate. A thin carbon coating stabilized the ultrathin sections on grids for the imaging by transmission electron microscopy.
Anzeige

Semithin sections were photographed with an inverted light microscope (ApoTome2, Carl Zeiss Microscopy), using a color CMOS camera (AxioCam 503 color, Carl Zeiss Microscopy), a 40x/1.1 NA water immersion objective and automated image montaging provided by the camera software (ZEN blue, version 2.6). Transmission electron microscopy (TEM) of ultrathin sections was performed by a group of operators using the following microscopes: (1) HITACHI 7800 (Hitachi), equipped with a tungsten filament operated at 100 kV; (2) Tecnai Spirit (Thermo Fisher Scientific), equipped with a LaB6 filament operated at 120 kV; and (3) JSM-2100 (Jeol), equipped with a LaB6 filament operated at 200 kV. Digital images presented in the manuscript were either acquired with a CCD camera (MegaviewIII, EMSIS) or a CMOS camera (Phurona, EMSIS). Montages of images were produced by using the respective camera acquisition software (iTEM, version 5.2, OSIS; Radius, version 2.1, EMSIS).
Large montages (up to 200 images) were recorded from thin sections collected on silicon wafers using a scanning electron microscope (Teneo, Thermo Fisher) and an in-column detector (T1) at 2 kV, 25–100 µA, 2–3 mm working distance. Large-field scans or tiled scans were recorded with a resolution of 1.8 to 49 nm per pixel, a dwell time of 3 µs and a line integration of 2. Stitching of the recorded images was either performed with the MAPS software (version 2.5, Thermo Fisher) used for acquisition or with the TrakEM module of Fiji [21].
We investigated six “cryobiopsy” samples from six deceased patients at the ultrastructural level. After an initial inspection of sections from all samples, which showed that the ultrastructural preservation was sufficient for a detailed analysis, we employed a systematic investigation strategy. From each sample, we took sections (semithin and ultrathin) with at least 1 mm2 surface area and a total depth of 1 mm at intervals of 100 µm or less. At least one thin section per section level was investigated by an expert in diagnostic EM using TEM. Mean investigation time per section was at least 1 h. The detection of viruses followed morphological criteria which are unique for coronaviruses [22].

The relatives of the patients gave their consent to take the biopsies and to analyze them scientifically.
Anzeige

The authors declare no competing interests.
Open AccessThis article is licensed under a Creative Commons Attribution 4.0 International License, which permits use, sharing, adaptation, distribution and reproduction in any medium or format, as long as you give appropriate credit to the original author(s) and the source, provide a link to the Creative Commons licence, and indicate if changes were made. The images or other third party material in this article are included in the article's Creative Commons licence, unless indicated otherwise in a credit line to the material. If material is not included in the article's Creative Commons licence and your intended use is not permitted by statutory regulation or exceeds the permitted use, you will need to obtain permission directly from the copyright holder. To view a copy of this licence, visit http://​creativecommons.​org/​licenses/​by/​4.​0/​. 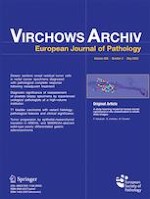