Tumor progression occurs through the modulation of a number of physiological parameters, including the development of immunosuppressive mechanisms to prevent immune detection and response. Among these immune evasion mechanisms, the mobilization of myeloid-derived suppressor cells (MDSC) is a major contributor to the suppression of antitumor T-cell immunity. Patients with renal cell carcinoma (RCC) show increased MDSC, and methods are being explored clinically to reduce the prevalence of MDSC and/or inhibit their function. In the present study, we investigated the relationship between MDSC and the therapeutic potential of a TRAIL-encoding recombinant adenovirus (Ad5-TRAIL) in combination with CpG-containing oligodeoxynucleotides (Ad5-TRAIL/CpG) in an orthotopic mouse model of RCC. This immunotherapy effectively clears renal (Renca) tumors and enhances survival, despite the presence of a high frequency of MDSC in the spleens and primary tumor-bearing kidneys at the time of treatment. Subsequent analyses revealed that the CpG component of the immunotherapy was responsible for decreasing the frequency of MDSC in Renca-bearing mice; further, treatment with CpG modulated the phenotype and function of MDSC that remained after immunotherapy and correlated with an increased T-cell response. Interestingly, the CpG-dependent alterations in MDSC frequency and function did not occur in tumor-bearing mice complicated with diet-induced obesity. Collectively, these data suggest that in addition to its adjuvant properties, CpG also enhances antitumor responses by altering the number and function of MDSC. 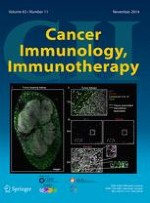 A nervous tumor microenvironment: the impact of adrenergic stress on cancer cells, immunosuppression, and immunotherapeutic response

Erratum to: Immunological and biological changes during ipilimumab treatment and their potential correlation with clinical response and survival in patients with advanced melanoma