Crescentic IgA nephropathy (C-IgAN) is defined as IgAN with more than 50% of glomeruli showing crescents. C-IgAN in children is rare; we investigate in detail for the first time.

We retrospectively analyzed the 515 consecutive children who were newly diagnosed with biopsy-proven IgAN between June 1976 and May 2010. We compared clinical and pathological findings between C-IgAN and non-C-IgAN.

We confirmed the importance of school screening to find C-IgAN. Although most crescents (mean: 98.1%) of C-IgAN were cellular/fibrocellular, and acute lesions were well modified with combination therapy, the presence of tubular atrophy in C-IgAN may be the reason for poorer prognosis. 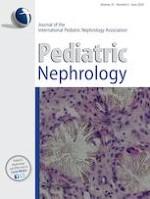 Nephrotic syndrome in a patient with cystinuria: Answers