The online version of this article (doi:10.​1007/​s10545-017-0077-8) contains supplementary material, which is available to authorized users.
Katrin Hinderhofer and Konstantin Mechler contributed equally to this work (joint first authorship)

Molybdenum cofactor deficiency (MoCD) is an ultra-orphan, life-threatening disease. Substrate substitution therapy has successfully been performed in single cases of MoCD type A and clinical trials are underway for drug registration. We present an innovative approach for classification of genotype severity to test the hypothesis that milder sequence variants in MoCD result in a less severe disease phenotype quantitated by patient survival.

All available worldwide published cases with clinical and genetic data were included (n = 40). We stratified the already published disease causing sequence variants as mild or severe with the use of in silico prediction programs, where possible and assessed the possible impact of the variants on the expression of the gene or function of the expressed protein. In a compound heterozygous situation the mildest sequence variant determined the genotype. Subsequently, clinical manifestations and outcomes of both groups were compared.

Patients with a severe genotype showed a median survival of 15 months and had a lower probability of survival compared to patients with mild genotypes who were all alive at last reported follow-up (p = 0.0203, Log-rank test).

The severity of the genotype assessed by in silico prediction and further classification explained survival in molybdenum cofactor deficiency and may therefore be considered a confounder for the outcome of therapeutic clinical trials requiring adjustment in the clinical trial design or analysis. These results should further be investigated by future in vitro or in vivo functional studies. Caution should be taken with this approach for the classification of variants in molecular genetic diagnostics or genetic counseling. 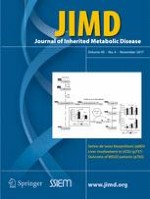 Rigor of non-dairy galactose restriction in early childhood, measured by retrospective survey, does not associate with severity of five long-term outcomes quantified in 231 children and adults with classic galactosemia

Vitamin B6 is essential for serine de novo biosynthesis