sPDGFRβ and albumin were measured by sandwich ELISA in ante-mortem CSF from 39 AD and 39 age-matched controls that were grouped according to their biomarker profile (i.e. AD cases t-tau > 400 pg/mL, p-tau > 60 pg/mL and Aβ42 < 550 pg/mL). sPDGFRβ was also measured in matched serum and CSF samples (n = 23) in a separate neurologically normal group for which the CSF/serum albumin ratio had been determined. 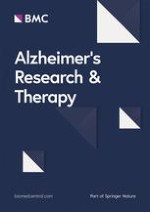 Early recognition and treatment of neuropsychiatric symptoms to improve quality of life in early Alzheimer’s disease: protocol of the BEAT-IT study