Wall-carving technique (WC) is a special volume rendering technique of three-dimensional CT gastrography that can illustrate the enhancement of gastric wall at an arbitrary depth. We conducted the present study to evaluate the impact of contrast enhancement based on layer depth on WC of gastric cancer and to correlate them with pathological findings.

The subjects of this retrospective study consisted of 36 patients with advanced gastric cancer (22 men, 14 women; age range, 39–90 years; median, 67 years) who underwent contrast-enhanced CT before surgery. WC images of arterial phase were divided into first and second layer. Two radiologists in consensus evaluated the contrast enhancement of WC images for each layer and correlated with pathologic factors.

The contrast enhancement on WC of gastric cancer showed a significant relationship with pathological factors based on layer depth. 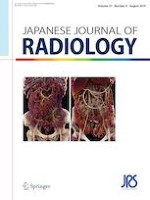