1. Curcumin effectively attenuates airway inflammation and airway remolding in LC-challenged COPD murine models.
2. Curcumin significantly inhibited the proliferation of BEAS-2B cells, which suggested that curcumin may inhibit airway wall thickness and airway remolding.
3. Curcumin potently suppressed the degradation of IκBα and expression of COX-2 both in vivo and in vitro, which may be the underlying molecular mechanism of the therapeutic effect of curcumin on COPD.

The purpose of this study is to evaluate the therapeutic effects of curcumin on airway inflammation using LPS and cigarette smoke (LC)-induced COPD murine models and LPS-stimulated human bronchial epithelial (BEAS-2B) cells. In this research, COPD murine models were established after challenged with LPS for 2 days and exposed to cigarette smoke for 35 days. Treatment with curcumin for 10 days distinctly alleviated airway inflammation and airway remolding in LC-induced COPD mice according to the lung H&E histopathological examination. The number of neutrophils and lymphocytes in broncho alveolar lavage fluid (BALF) was significantly decreased in curcumin+LC-treated group compared with the LC-induced mice. Additionally, curcumin inhibited BEAS-2B cells proliferation, which suggested the preventive effect of curcumin on progressive airway remolding and inflammatory response mediated by bronchial epithelial cells. Further investigation demonstrated an underlying molecular mechanism for the therapeutic effects of curcumin may rely on the inhibition of the degradation of IκBα and COX-2 expression in curcumin+LC-treated COPD mice and LPS-stimulated BEAS-2B cells. Overall, curcumin alleviates the airway inflammation and airway remolding, which is closely related to inhibit the BEAS-2B cells proliferation and suppress the activation of NF-κB and COX-2 expression. These findings indicate that curcumin may be a potential agent for the therapy of COPD. 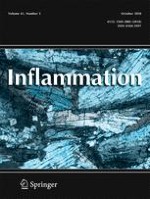