Conventional endoscopic resection (CER) for early colorectal neoplasia (CRN) is widely accepted as a minimally invasive treatment. Endoscopic submucosal dissection (ESD) was developed in Japan to resect larger lesions, but ESD was not covered by the Japanese national health insurance until April 2012. In addition, treatment strategies vary considerably among medical facilities. To evaluate the current situation in Japan regarding endoscopic treatment of CRNs measuring ≥20 mm, we conducted a prospective multicenter study at 18 medium-volume and high-volume specialized facilities in cooperation with the Japan Society for Cancer of the Colon and Rectum (JSCCR).

The JSCCR conducted a multicenter, observational study of all patients treated by CER and ESD of CRNs measuring ≥20 mm.

The en bloc resection rate for ESD was significantly higher than for CER, although complication rates were fairly low. Despite a longer procedure time, safety of colorectal ESD has improved in various facilities in Japan. However, ESD for lesions measuring ≥40 mm must be performed by experienced endoscopists due to the longer procedure time. 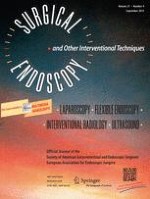 National outcomes and uptake of laparoscopic gastrectomy for cancer in England

Surgical treatment of aortoesophageal fistula induced by a foreign body in the esophagus: 40 years of experience at a single hospital