In this case from 1937, the deceased was a 52-year-old female who was suffering from systemic cysticercosis, with prominent neurological and psychiatric symptoms. Given the protracted clinical course and autopsy findings it appears likely that the disease led the woman to commit suicide by ingesting lye, a corrosive substance, and the most common way to commit suicide in Belgrade at the time. The autopsy revealed many rounded transparent cysts, attached to the dura and pia-arachnoid, as well as encapsulated in the intercostal muscles, diaphragm and muscles of the arms, legs and the trunk. Solitary cysticercosis of muscles without involvement of the central nervous system is rare: most soft tissue and muscular cysticercal infections are associated with the central nervous system. Parasites usually lodge in the cerebral cortex or the subcortical white matter, due to the high vascular supply of these areas. Psychiatric symptoms in neurocysticercosis have been frequently reported, along with cognitive decline and intellectual deterioration, depressive disorders, behavioral disturbance and psychosis. Although sporadically, the disease is present even today, and neurocysticercosis is the leading cause of epilepsy in the developing world. To maintain its lifecycle, Taenia solium requires non-industrialized pig rearing conditions, consumption of undercooked pork, and low sanitation standards. Socioeconomic and sanitary improvement and educating people about food processing, the disease and antihelminthic therapy, are important factors contributing to a significant reduction in the prevalence of this potentially eradicable disease worldwide. 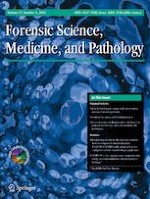 Is it time for targeted and minimally invasive post-mortem examination using total body computed tomography in a medicolegal autopsy?