The clinical data of 80 PLC patients who underwent TACE in our hospital from January 2015 to January 2017 were collected, including the plasma d-dimer level 1 week before TACE (D0), d-dimer level 1 month after TACE (D1) and d-dimer level when the disease begins to progress (D2). 1 Month after TACE, these patients were divided into two groups according to the mRecist criteria: disease-controlled group (CR + PR + SD) and disease-progressing group (PD). In all subjects, progression-free survival (PFS) was recorded. D0 and D1 were compared between the two groups by the rank sum test; and the relation between d-dimer level and PFS was assessed by the Kaplan–Meier test and Breslow test.

The change in plasma d-dimer level can be used as a biological index to assess the efficacy of TACE and prognosis for PLC patients, and thus, a positive d-dimer level or d-dimer increase after TACE is an unfavorable factor. 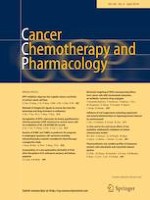