Recent reports have shown that excellent survival outcomes can be achieved in adult Burkitt’s lymphoma with the use of DA-EPOCH-R regimen. When compared to earlier intense pediatric-type protocols, this regimen is less toxic. There are limited reports available on the use of this regimen outside the context of clinical trials. We analyzed the outcomes of patients who were treated with the DA-EPOCH-R regimen [Burkitt’s lymphoma (BL), primary mediastinal B cell lymphoma (PMBCL) and HIV-positive patients with diffuse large B cell lymphoma (DLBCL)] at our center over a 3 year period. Baseline characters, responses, and toxicity data was captured from records. Event-free survival (EFS—from therapy initiation till occurrence of event (non-achievement of complete response or relapse) and overall survival (OS—from therapy initiation till death due to any cause) were estimated using Kaplan–Meier method. Among 41 patients [median age 40 years (18–76)], the following diagnoses were included-HIV negative patients (N = 29): BL (N = 24), PMBCL (N = 5); HIV positive patients (N = 12): BL (N = 8), and DLBCL (N = 4). Among those with BL, majority had stage III/IV disease (N = 21/32, 65%). At the completion of planned therapy, 33 had achieved CR (81%). One patient died due to toxicity. The actuarial EFS and OS at 2 years were 80 and 77% respectively for all patients. The OS at 2 years was 100% for PMBCL, 80% for BL and 50% for HIV-positive DLBCL. Majority of the failures in BL were in patients with advanced disease. DA-EPOCH-R can be used in real-world setting and allows treatment of older patients with BL. 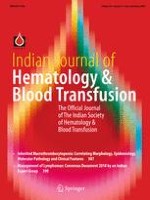 Prenatal Diagnosis of HbE-β-Thalassemia: Experience of a Center in Western India