Damage control strategy (DCS) is a two-staged procedure for the treatment of perforated diverticular disease complicated by generalized peritonitis. The aim of this retrospective multicenter cohort study was to evaluate the prognostic impact of an ongoing peritonitis at the time of second surgery.

Consecutive patients who underwent DCS for perforated diverticular disease of the sigmoid colon with generalized peritonitis at four surgical centers were included. Damage control strategy is a two-stage emergency procedure: limited resection of the diseased colonic segment, closure of oral and aboral colon, and application of a negative pressure assisted abdominal closure system at the initial surgery followed by second laparotomy 48 h later. Therein, decision for definite reconstruction (anastomosis or Hartmann’s procedure (HP)) is made. An ongoing peritonitis at second surgery was defined as presence of visible fibrinous, purulent, or fecal peritoneal fluid. Microbiologic findings from peritoneal smear at first surgery were collected and analyzed.

Ongoing peritonitis after DCS is a predictor of a worse outcome in patients with perforated diverticulitis. Enterococcal and fungal infections have a negative impact on occurrence of OP and overall outcome. 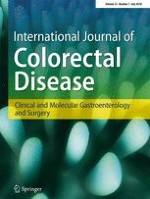 Peripheral vs pedicle division in laparoscopic resection of sigmoid diverticulitis: a 10-year experience

Subtypes and symptoms of fecal incontinence in the Dutch population: a cross-sectional study

Time from colorectal cancer diagnosis to laparoscopic curative surgery—is there a safe window for prehabilitation?