The excessive proliferation of fibroblast-like synoviocytes (FLSs) is a key inducement for the occurrence and development of rheumatoid arthritis (RA). Hypoxia inducible factor-α (HIF-α) accumulation is involved in the regulation of cell biological functions in the hypoxic microenvironment of synovium. This study aimed to investigate the roles of HIF-α and its level regulator prolyl hydroxylases (PHDs) in FLSs proliferation and to explore the regulatory effect of geniposide (GE). 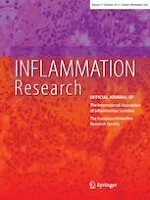 Cytokine storm: behind the scenes of the collateral circulation after acute myocardial infarction

The effect of immunomodulatory properties of naringenin on the inhibition of inflammation and oxidative stress in autoimmune disease models: a systematic review and meta-analysis of preclinical evidence

Review: the role of GSDMD in sepsis