Cadmium (Cd) is a common environmental pollutant that leads to severe cardiotoxic hazards. Several studies were carried out to protect the myocardium against Cd-induced cardiotoxicity. Up till now, no researches evaluated the protective effect of dapagliflozin (DAP) against Cd induced cardiotoxicity. Thus, we aimed to explore the role of DAP in such model with deep studying of the involved mechanisms. 40 male Wistar albino rats were included in current study. Cd (5 mg/kg/day) was administered orally for 7 days to induce cardiotoxicity with or without co-administration of DAP in three different doses (2.5, 5, 10 mg/kg/day) orally for 7 days. Our data revealed that Cd could induce cardiotoxicity with significant increase in serum cardiac enzymes, heart weight, tissue malondialdehyde (MDA), tumor necrosis factor alpha (TNFα), nuclear factor kappa B (NFκB), toll like receptor2 (TLR2), interleukin 6 (IL6) and caspase3 immunoexpression with abnormal histopathological changes. In addition, Cd significantly decreased the level of heme oxygenase1 (HO1), nuclear factor erythroid 2-related factor 2 (Nrf2), signal transducer and activator of transcription (STAT3), reduced glutathione (GSH), glutathione peroxidase (GPx), and total antioxidant capacity (TAC). Co-administration of DAP could ameliorate Cd cardiotoxicity with significant improvement of the biochemical and histopathological changes. We found that DAP had protective properties against Cd induced cardiotoxicity and this may be due to its anti-oxidant, anti-inflammatory, anti-apoptotic properties and modulation of IL6/STAT3 and TLR2/TNFα-signaling pathways.
Begleitmaterial
Supplementary file1 (PDF 86 kb)
Hinweise
Handling Editor: Travis Knuckles.

Cadmium (Cd) is one of the most common toxic heavy metals that have severe cardiotoxic hazards especially on excessive exposure during cigarette smoking or food and water contamination. Cd has a great ability to accumulate in our bodies for very long period [1]. Several mechanisms mediate Cd cardiotoxicity such as induction of oxidative stress with release of free radicals, metabolic disturbance and dyslipidemia. Cardiotoxicity of Cd leads to atherosclerosis, coronary spasm, ischemic injury, myocardial infarction, hypertension, and stroke [1, 2]. Uncontrolled and excessive formation of free radicals is the main cause that stimulates oxidative stress and disturbs cellular function leading to membrane lipid peroxidation, DNA damage, and cell death. Furthermore, heart cells are highly sensitive to the released reactive oxygen species (ROS) and the anti-oxidative system of these cells is fully saturated by the endogenous oxidative metabolic products [1].
Up-regulation of the different inflammatory pathways is considered as another important cascade in mediating Cd cardiotoxicity. Stimulation of pro-inflammatory cytokines including tumor necrosis factor alpha (TNFα), interleukin6 (IL6) and nuclear factor kappa B (NFκB) is accompanied with enhancement of Janus kinase/signal transducer and activator of transcription (JAK/STAT) which is a critical pathway during cardiac injury [3‐5]. STATs are considered as a family of protein that could regulate gene expression of angiogenesis, inflammation and apoptosis. This family is pre-stimulated with IL-6 and mediates different cardiac disorders as hypertrophy, myocardial infarction and heart failure [6‐8]. Besides that, toll-like receptors (TLRs) control innate immunity and inflammation inside the cell and increase the gene expression of different pro-inflammatory cytokines such as TNFα and interleukins that have a critical role in myocardial tissue injuries. We can conclude that modulation of the TLR2/TNFα and IL6 /STAT pathways represents essential targets in controlling cardiac damage [9‐13].
Anzeige
Sodium glucose co-transporter 2 (SGLT2) inhibitors including dapagliflozin (DAP) are the most recent oral anti-diabetic drug group. Its action is based on decreasing blood glucose level and inhibiting renal glucose reabsorption. Furthermore, DAP has non-glycemic effects including lowering of blood pressure, ability to control metabolic disorders and decreasing body weight [14‐17]. DAP could decrease inflammatory cytokines including inflammasome, IL-1β and IL-6 but increase anti-inflammatory one; IL-10, increase the M2 (anti-inflammatory)/M1(pro-inflammatory) phenotypemacrophage ratio. In addition, DAP acts as an antioxidant and mediates M2 macrophage polarization through regulating STAT3 pathway with scavenging of reactive oxygen and nitrogen species followed by decrease of cardiac inflammation. Moreover; it controls the renal renin angiotensin aldosterone system, decreases cardiac and renal complications of diabetes, improves cardiac ischemia–reperfusion injury and doxorubicin cardiotoxicity depending on its pharmacological properties but till now there are no data regarding its role in Cd cardiotoxicity [18‐22].
Increasing the critical need for finding new cardioprotective agents against Cd cardiotoxicity and the recently detected cardiopreserving properties of DAP guided us to evaluate its ability to control Cd cardiotoxicity and to investigate the different mechanisms mediating such effect including TLR2/TNFα and IL6/STAT3 pathways.

Preparation of Samples and Storage

Rats were euthanized on 7th day and each rat was anesthetized by i.p. injection of 20% Urethane hydrochloride (1 mg/kg). Arterial blood of each rat was collected from abdominal aorta then centrifuged at 5000 rpm for 15 min to obtain the sera (JanetzkiT30 centrifuge, Germany) for measuring cardiac enzymes and TAC. Each heart was excised, washed with saline and weighed. One part of each ventricle was fixed in 10% formalin and embedded in paraffin for further histopathological and immunohistochemical examination and another part was kept at − 80 °C. For preparing cardiac tissue homogenates specimens were homogenized in PBS 20%w/v using GLAS-Col homogenizer, USA then centrifuged at 3000 rpm for 20 min and the supernatant was separated and kept at − 80 °C till used.
Anzeige

Assessment of Cardiac Enzymes (Troponin I, CK-MB and LDH) in Serum

Serum cardiac enzymes were measured using the available commercial ELISA kits according to the manufacturers’ instruction based on sandwich ELISA immunoassay technique. The microtiter plate was pre-coated with a monoclonal antibody specific for each parameter then standards or samples were added to the microtiter plate wells and the detected enzyme bound to the antibody pre-coated wells. The enzyme–substrate reaction was terminated by addition of a sulphuric acid solution and the color change was measured spectrophotometrically. The color intensity was proportional to the concentration of the detected enzyme.

We used colorimetric kit for measuring TAC and results were expressed as mmol/ml. MDA was the major product of lipoperoxidation that was detected colormetrically with the formation of MDA-thiobarbituric acid pink colored Schiff base adduct at 535 nm using 1, 1, 3, 3-tetramethoxypropane as standard and results were expressed as nmol/g tissue [26]. Measurement of GSH was based on binding of sulfhydryl group with Ellman’s reagent followed by formation of a yellow color that was detected colormetrically at 405 nm by Beckman DU-64 UV/VIS spectrophotometer, USA as µmol/g tissue [27].

Detection of these markers was performed according to manufacturer’s instructions of the available ELISA kit depending on the double-sandwich ELISA technique. The pre-coated antibody of the measured parameters and the detecting antibody were labeled with biotin. Samples and biotin labeling antibody were added into ELISA plate wells and washed out then Avidin-peroxidase conjugates were added to ELISA wells. Finally, yellow color formed and the intensity of the color was positively correlated with the testing factors in samples.

After sacrifice; part of each ventricle was prepared for histopathological examination, dissected, fixed in formaldehyde for 24 h and embedded in paraffin wax. Five µm sections were cut for hematoxylin and eosin stain and immunohistochemistry. The pathologist examined these slides in a blinded fashion using light microscopy (Olympus microscope, Japan). Scoring of the histopathological changes in different groups was assessed according to the degree of vascular congestion; hemorrhage; hemosiderosis; muscle striation; apoptosis and necrosis. The grades were as follows: score − normal, score + mild, score ++ moderate and score +++ severe [3].

Slides of the cardiac tissue specimens were de-paraffinized with xylene, hydrated in a descending graded ethyl alcohol then treated by 3% hydrogen peroxide for 30 min to block endogenous peroxides. Slides were washed in PBS solution and boiled for 20 min in citrate buffer (pH 6.0) by microwave for antigen retrieval [1, 3].
After rinse in PBS, caspase3 antibody was applied and incubated overnight then rinsed in PBS before applying the biotinylated secondary antibody for 30 min. The streptavidin–biotin complex reagent was added for 30 min after washing in PBS. For detection of brown color; 3, 3-diaminobenzidinetetra hydrochloride (DAB) was used. Slides were washed in distilled water, counterstained with hematoxylin, dehydrated in ethanol, cleared in xylene and covered slipped. The mean area percentage of active caspase 3 reaction was measured [30].

Animal handling, medications, and animal sacrifice were carried out according to the guidelines of the experimental animals care and approved by the Institutional Ethical Committee, Faculty of Medicine, Minia University, Egypt in agreement with the NIH Guide for taking care and use of laboratory animals. Approval No. 20:3/2021.

Not applicable.
Open AccessThis article is licensed under a Creative Commons Attribution 4.0 International License, which permits use, sharing, adaptation, distribution and reproduction in any medium or format, as long as you give appropriate credit to the original author(s) and the source, provide a link to the Creative Commons licence, and indicate if changes were made. The images or other third party material in this article are included in the article's Creative Commons licence, unless indicated otherwise in a credit line to the material. If material is not included in the article's Creative Commons licence and your intended use is not permitted by statutory regulation or exceeds the permitted use, you will need to obtain permission directly from the copyright holder. To view a copy of this licence, visit http://​creativecommons.​org/​licenses/​by/​4.​0/​. 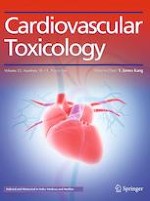