Prolonged treatment and painful tooth movement are major problems for patients undergoing orthodontic treatment. Accelerating the movement of teeth leads to shortening of the treatment period, so various studies on the movement of teeth have been conducted in the field of orthodontics. In previous studies, we performed a fiber incision-like fiberotomy using an Er:YAG laser in rats and confirmed acceleration of tooth movement. Therefore, in this study, the effect of Er:YAG laser irradiation on human gingival fibroblasts was investigated in vitro. Human gingival fibroblasts (2.0 × 105 cells) were seeded in a 6-well plate and reached 80% confluence 24 h later. A control group not undergoing any irradiation and 3 groups undergoing laser irradiation at 0.6 W, 1.0 W, and 1.2 W were investigated. Laser irradiation was performed 24 h after cell seeding. The cells were then recovered 24 h later, and the cyclooxygenase-2 (COX-2), interleukin-1β (IL-1β), tumor necrosis factor-α (TNF-α), bone morphogenetic protein-2 (BMP-2), and BMP-4 genes were confirmed by PCR. In addition, a control group not undergoing any procedures, a group undergoing only Er:YAG laser irradiation, a group undergoing only centrifugal loading, and a group undergoing both Er:YAG laser irradiation and centrifugal force loading were investigated. After 24 h, cells were collected and PCR was performed. Twenty-four hours after laser irradiation, gene expressions were examined by quantitative RT-PCR, which showed that the gene expressions of COX-2, IL-1β, TNF-α, BMP-2, and BMP-4 increased depending on the amount of irradiation energy, with the largest value at 1.2 W. Gene expressions of COX-2, IL-1β, TNF-α, BMP-2, and BMP-4 were significantly higher in the laser with centrifugal load group than in the load group. These results suggest that genes related to bone metabolism are activated in human gingival fibroblasts when mechanical stimulation and laser irradiation are combined. This helps to elucidate the effects of Er:YAG laser irradiation during tooth movement.
Anzeige 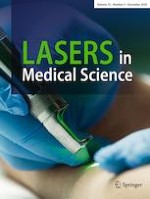 Dose-dependent effect of the pulsed Nd:YAG laser in the treatment of crushed sciatic nerve in Wister rats: an experimental model