Acute pancreatitis (AP) is an inflammatory process of the pancreas resulting from biliary obstruction or alcohol consumption. Approximately, 10–20% of AP can evolve into severe AP (SAP). In this study, we sought to explore the physiological roles of the transcription factor serum response factor (SRF), annexin A2 (ANXA2), and nuclear factor-kappaB (NF-κB) in SAP.

C57BL/6 mice and rat pancreatic acinar cells (AR42J) were used to establish an AP model in vivo and in vitro by cerulein with or without lipopolysaccharide (LPS). Production of pro-inflammatory cytokines (IL-1β and TNF-α) were examined by ELISA and immunoblotting analysis. Hematoxylin and eosin (HE) staining and TUNEL staining were performed to evaluate pathological changes in the course of AP. Apoptosis was examined by flow cytometric and immunoblotting analysis. Molecular interactions were tested by dual luciferase reporter, ChIP, and Co-IP assays.

ANXA2 was overexpressed in AP and correlated to the severity of AP. ANXA2 knockdown rescued pancreatic acinar cells against inflammation and apoptosis induced by cerulein with or without LPS. Mechanistic investigations revealed that SRF bound with the ANXA2 promoter region and repressed its expression. ANXA2 could activate the NF-κB signaling pathway by inducing the nuclear translocation of p50. SRF-mediated transcriptional repression of ANXA2-protected pancreatic acinar cells against AP-like injury through repressing the NF-κB signaling pathway.

Our study highlighted a regulatory network consisting of SRF, ANXA2, and NF-κB that was involved in AP progression, possibly providing some novel targets for treating SAP.
Anzeige 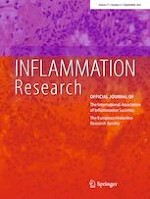 The role of Th17 cells: explanation of relationship between periodontitis and COPD?

MAIT cells and their implication in human oral diseases

Long-term implications of COVID-19 on bone health: pathophysiology and therapeutics