The diagnosis of bilateral vestibulopathy (BV) is typically established based on bilateral semicircular canal dysfunction. The degree to which both otolith organs—the saccule and utricle—are also impaired in BV is not well-established, particularly with respect to the etiology and severity of BV. The aim of this study was to evaluate semicircular canal, saccular and utricular function in patients with BV due to aminoglycoside ototoxicity and bilateral Menière’s disease, and with different severities of BV. Caloric and head impulse testing were used as measures of canal function. Cervical vestibular-evoked myogenic potentials (cVEMP) and ocular VEMPs (oVEMP) were used as measures of saccular and utricular function, respectively. We enrolled 34 patients with BV and 55 controls in a prospective case–control study. Patients with BV were less likely to have saccular (61 %) or utricular (64 %) dysfunction relative to canal dysfunction (100 %). Utricular function differed significantly between patients by etiologic group: the poorest function was found in patients with BV due to aminoglycoside toxicity, and the best function in Menière’s disease patients. Canal and saccular function did not vary according to etiology. Further, utricular but not saccular function was significantly correlated with canal function. Saccular and utricular function had the strongest association with Dizziness Handicap Inventory scores relative to canal function. These data suggest that when a patient with BV is identified in a clinical context, oVEMP testing is the most sensitive test in distinguishing between aminoglycoside toxicity and bilateral Menière’s disease. Both cVEMP and oVEMP testing may be considered to evaluate the functional impact on the patient. 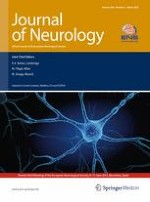 Erratum to: The frequency of spinocerebellar ataxia type 23 in a UK population

Erratum to: Treatment of essential tremor: a systematic review of evidence and recommendations from the Italian Movement Disorders Association

Narcolepsy: clinical differences and association with other sleep disorders in different age groups