Palatine rugae are asymmetrical and irregular elevations of the mucosa located in the palate. Once they are formed they can change in size but their shape remains constant. These formations are considered a landmark during orthodontic treatment. The aim of this study was to identify malocclusion in young individuals through patterns of palatal rugae.

A total of 105 subjects aged 9–14 years were selected for the study. The subjects were divided into three groups based on their malocclusion. Maxillary and mandibular arch impressions were taken using alginate (Algin-Gum) followed by preparation of casts using dental stone. All the casts (n=105) were analyzed and then categorized using the classification of Nayak et al. The samples were evaluated using the Mann–Whitney U test and Kruskal–Wallis ANOVA test.

In all the malocclusions, the wavy pattern was prevalent followed by the straight pattern. Nonspecific and curved rugae patterns were the least prevalent patterns. A circular pattern was completely absent.

The wavy pattern of rugae was predominant in all types of malocclusions followed by the straight pattern. There was no significant relation between the types of palatal rugae and malocclusion.
Anzeige 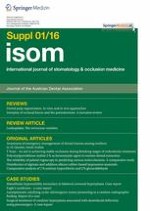 Interplay of occlusal forces and the periodontium

Awareness of emergency management of dental trauma among mothers in Al-Qassim, Saudi Arabia