In China, hepatocellular carcinoma (HCC) incidence rates in several registry catchment populations are amongst the highest worldwide. The incidence rates in urban Shanghai were analyzed between 1976 and 2005 to describe and interpret the time trends. Age-specific and age-standardized rates were calculated and graphically presented. An age-period-cohort model was fitted to assess the effects of age at diagnosis, calendar period, and birth cohort on the changing HCC incidence rates. In total, 35,241 and 13,931 men and women were diagnosed with HCC during 1976–2005 in urban Shanghai. The age-standardized incidence rates in urban Shanghai were 33.9 per 105 among men and 11.4 per 105 among women in 1976–1980, but decreased in both sexes to 25.8 per 105 and 8.5 per 105, respectively by 2001–2005. Accelerating rates in birth cohorts born in the early-1930s and decelerating rates circa 1945 were observed in both sexes, with further accelerations noted in the late-1950s (in women) and early-1960s (in men). Given the parameterization, increases in risk of HCC were seen in successive male and female generations between 1900 and 1935, followed by a further increase among successive cohorts born around 1960, with a reduction in risk in the most recent generations. The incidence rates of HCC in urban Shanghai from 1976 to 2005 have declined in both sexes, with the complex but similar patterns observed in successive generations suggestive of a shared changing prevalence in risk factors in men and women, with a role possibly for HBV interventions reducing risk of HCC in cohorts born after 1960. 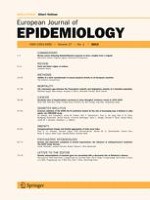 Anxiety and depression symptoms in arterial hypertension: the influence of antihypertensive treatment. The HUNT study, Norway

Fetal and infant origins of asthma