The association between peripheral arterial disease (PAD) and low bone mass is controversial. In our study, peripheral quantitative computed tomography shows a reduction of cortical but not trabecular, bone mineral density (BMD) at the forearm, in patients with subclinical PAD.

Some controversy exists regarding the association between peripheral arterial disease (PAD) and low bone mass. Previous studies have evaluated bone mineral density (BMD) in patients with subclinical PAD, with mixed results. Inconsistency of data may depend on the fact that most studies measured areal bone mineral density (aBMD) by Dual-energy-x ray absorptiometry (DXA). Because DXA cannot distinguish between cortical and trabecular compartments, we reasoned that a study aimed to establish whether these compartments were differentially affected by PAD status could give more information on the nature of this association.

In this cross-sectional study, we used peripheral quantitative computed tomography (pQCT) to examine volumetric cortical and trabecular mineral density at the radius (vBMD) in a cohort of subjects with subclinical PAD as defined by ABI ≤0.90 and compared them with healthy subjects with no evidence of PAD.

Subclinical PAD induces a selective bone loss at the radius compartment, not identified by standard DXA, which seems to occur primarily at the cortical level. 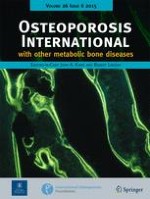 A novel 3D-printed device for localization and extraction of trabeculae from human femoral heads: a comparison with traditional visual extraction

Platelet indices can relate to bone mineralization: response to comments by Varol

Targeted assessment of fracture risk in women at midlife