A total of 158 subjects were included in the study, and the three groups were respectively composed of 53 controls, 86 patients with gastritis, and 19 patients with gastric cancer. miRNA-181c expression and H. pylori infection were determined by quantitative real-time PCR and PCR, respectively. The subsequent target gene analysis was performed using the bioinformatics approach to understand the possible mechanisms of gastric cancer.

We determined significantly lower miRNA-181c expression in the gastric cancer group when compared to the control and gastritis groups, regardless of the presence of H. pylori. There was no difference in miRNA-181c expression between the control group and gastritis group, whether the presence of H. pylori was considered or not. The bioinformatics approach identified several genes as possible targets for miRNA-181c, including the X-linked inhibitor of apoptosis (XIAP) gene (which encodes a protein that belongs to a family of apoptotic suppressor proteins), the caspase 9 gene, and the caspase 3 gene. All target genes identified may be involved in gastric cancer and apoptosis pathways.

The results suggest that the presence of H. pylori has no influence on microRNA expression and that the downregulation of miR-181c may play an important role in gastric cancer progression by controlling important genes associated with apoptosis. Therefore, miRNA-181c may be a potential marker of gastric cancer. 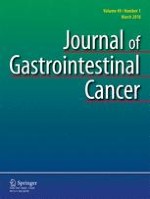 An Alternative Method for Screening Gastric Cancer Based on Serum Levels of CEA, CA19-9, and CA72-4

Pancreatic Cancer Management and Treatment Landscape Awareness of Gastroenterologists: Results from US Physician Surveys Conducted in 2013 and 2015