Despite recent advances in molecular genetics, the pituitary adenoma initiation, development, progress, and the molecular basis of their unique features are still poorly understood. In this sense, it is proposed that stem cell could be involved in pituitary adenoma tumorigenesis. It is suggested that TP63 has important functions in stem cells, and it may have interplay of TP63 and Notch and its ligand Jagged in this process. This study aimed to evaluate the distinct expression of TP63 isoforms (TAp63 and ΔNp63), as well as its correlation with Notch3 receptor and its ligand Jagged1 in human pituitary adenomas at the messenger RNA (mRNA) level. We included 77 pituitary adenoma tumor samples from patients who underwent surgical resection. The expression levels of TP63 isoforms (TAp63 and ΔNp63) and Notch3 and its ligand Jagged1 were evaluated by qRT-PCR using isoform-specific primers. We also evaluated proliferation index immunohistochemically using KI-67 antibody. The expression levels were associated with clinical outcomes, as age, gender, tumor size, and tumor subtype. In summary, we found that mRNA expression of both TP63 isoforms decreased in pituitary adenomas compared with normal pituitary control. On the other hand, there was an increase of relative Notch3 and Jagged1 mRNA expression in the majority of examined samples. The mRNA expression of three genes evaluated was correlated and statistically significantly. There was no significant association between gene expression and the analyzed clinical data. The current study has provided the first time evidence that Tap63 and ΔNp63 isoforms are underexpressed in most pituitary adenomas. These results are correlated with Notch3 and its ligand Jagged1 overexpression, corroborating previous studies pointing its antagonistic interactions. 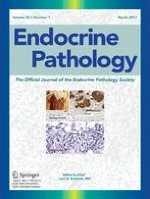 Familial Papillary Thyroid Carcinoma (FPTC): a Retrospective Analysis in a Sample of the Bulgarian Population for a 10-Year Period