Peripheral dedifferentiated chondrosarcoma (DCS) is an exceedingly rare aggressive surface bone neoplasm in which a high-grade sarcoma arises within an osteochondroma. Four such examples were identified in our files, representing 11.1% of all DCS treated at our hospital in the years 1995–2010, and were the object of the present study. The patients were two men and two women ranging in age between 30 and 64 years, with tumors located in the pelvis (n = 2), in the scapula (n = 1), and the tibia (n = 1). Radiologically, there was evidence of a preexisting osteochondroma associated with aggressive osteolytic areas at the base and periphery of the exostosis, extending to the bone segment of origin and to the soft tissues. Immunohistochemical analysis of cell cycle regulators showed consistent loss in the expression of p16 and overexpression of cyclin D1, and to a lesser extent of RB and p53, in the anaplastic compartments of peripheral DCS in comparison with the well-differentiated cartilaginous components, while no significant expression of MDM2 was observed in any of the cases studied. Moreover, PDGFRα was absent in both tumor components, and PDGF-Rβ was strongly and diffusely positive in all the cases. Finally, no mutations were identified in exons 4–9 of the TP53 gene in both cases, showing positivity for p53 in the anaplastic component. In conclusion, our study shows that alterations of genes implicated in the regulation of the G1 to the S phase cell cycle checkpoint contribute to the process of dedifferentiation in peripheral secondary chondrosarcoma (CS), although the molecular mechanisms seem at least in part to differ from those involved in the process of dedifferentiation of central CS. PDGFRβ could represent a potential target for treatments with receptor tyrosine kinase inhibitors in peripheral DCS. 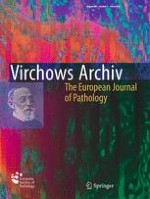