The online version of this article (https://​doi.​org/​10.​1007/​s00428-019-02577-x) contains supplementary material, which is available to authorized users.
Marit Lucas, Ilaria Jansen, Daniel M. de Bruin and Henk A. Marquering contributed equally to this work.
This article is part of the Topical Collection on Quality in Pathology

Histopathologic grading of prostate cancer using Gleason patterns (GPs) is subject to a large inter-observer variability, which may result in suboptimal treatment of patients. With the introduction of digitization and whole-slide images of prostate biopsies, computer-aided grading becomes feasible. Computer-aided grading has the potential to improve histopathological grading and treatment selection for prostate cancer. Automated detection of GPs and determination of the grade groups (GG) using a convolutional neural network. In total, 96 prostate biopsies from 38 patients are annotated on pixel-level. Automated detection of GP 3 and GP ≥ 4 in digitized prostate biopsies is performed by re-training the Inception-v3 convolutional neural network (CNN). The outcome of the CNN is subsequently converted into probability maps of GP ≥ 3 and GP ≥ 4, and the GG of the whole biopsy is obtained according to these probability maps. Differentiation between non-atypical and malignant (GP ≥ 3) areas resulted in an accuracy of 92% with a sensitivity and specificity of 90 and 93%, respectively. The differentiation between GP ≥ 4 and GP ≤ 3 was accurate for 90%, with a sensitivity and specificity of 77 and 94%, respectively. Concordance of our automated GG determination method with a genitourinary pathologist was obtained in 65% (κ = 0.70), indicating substantial agreement. A CNN allows for accurate differentiation between non-atypical and malignant areas as defined by GPs, leading to a substantial agreement with the pathologist in defining the GG. 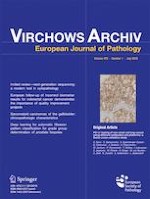