Banana bract mosaic virus (BBrMV) has never been reported in banana plants in Hawaii. In 2010, however, it was detected in a new host, flowering ginger (Alpinia purpurata). In this study, we characterize the A. purpurata isolate and study its spread in flowering ginger in Hawaii. A laboratory study demonstrated that BBrMV could be transmitted from flowering ginger to its natural host, banana, therefore raising a serious concern about the potential risk to the rapidly growing banana industry of Hawaii. To quickly monitor this virus in the field, we developed a robust immunocapture reverse transcription loop-mediated isothermal amplification (IC-RT-LAMP) assay. Deep sequencing of the BBrMV isolate from A. purpurata revealed a single-stranded RNA virus with a genome of 9,713 nt potentially encoding a polyprotein of 3,124 aa, and another predicted protein, PIPO, in the +2 reading-frame shift. Most of the functional motifs in the Hawaiian isolate were conserved among the genomes of isolates from one found in the Philippines and India. However, the A. purpurata isolate had an amino acid deletion in the Pl protein that was most similar to the Philippine isolate. Phylogenetic analysis of an eastern Pacific subpopulation that included A. purpurata was closest in genetic distance to a Southeast Asian subpopulation, suggesting frequent gene flow and supporting the hypothesis that the A. purpurata isolate arrived in Hawaii from Southeast Asia. 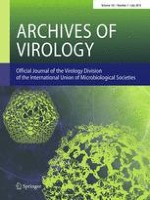 Epidemiological and clinical characteristics of respiratory viral infections in children in Shanghai, China

An epidemic of coxsackievirus B3 infection in infants and children in Jiangsu Province, China: a prospective cohort study