The objective of this study is to characterize stability and clinical features of patients with rheumatoid arthritis (RA) in sustained remission. Combination therapy with methotrexate and tumor necrosis factor inhibitors (TNFi) has increased remission rates in RA but optimal regimens to maintain remission are unknown. We describe Study of Etanercept And Methotrexate in Combination or as Monotherapy in Subjects with Rheumatoid Arthritis (SEAM-RA) and data from a run-in period of longitudinal observation. Patients in Simplified Disease Activity Index (SDAI) remission (score ≤ 3.3) receiving etanercept and methotrexate were screened and had to maintain remission over 3 run-in visits/24 weeks before randomization to combination therapy or withdrawal of etanercept or methotrexate. Baseline characteristics were examined for predictive factors for maintaining remission. As of November 2016, 141 patients have enrolled; of these, 64 have been randomized, 34 were ineligible after run-in, and 43 are in run-in period; 70% have completed run-in. Enrolled and randomized patients, respectively, had mean (standard deviation [SD]) disease duration 11.0 (8.6) and 12.6 (9.7) years; mean (SD) duration of etanercept use 4.2 (3.8) and 4.9 (4.2) years; mean (SD) methotrexate dose 15.9 (4.8) and 15.5 (4.9) mg/week; and mean (SD) SDAI scores 1.5 (0.9) and 1.4 (0.8). At enrollment, 73% and 63% were in Boolean remission based on 28 joints and 66/68 joints, respectively. No enrollment characteristic predicted successful completion of run-in. Two-thirds of patients considered to be in remission at enrollment sustained remission through 24 weeks. Baseline characteristics of enrolled patients and those who completed run-in were comparable. 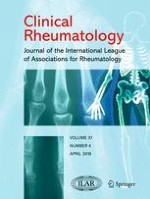 Correction to: Effect of daily low dose prednisone, divided or single daily dose, in the treatment of African Americans with early rheumatoid arthritis