Erythrocyte omega-3 index was measured at baseline. Cognition was measured over 3 years with a composite cognitive score (mean of 4 z-scores).

Dementia-free older adults with an omega-3 index below approximately 5% are at increased risk of cognitive decline, and could be a good target population for testing the cognitive effects of PUFA supplementation. 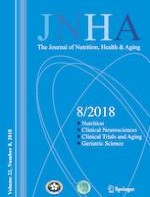 Effect of a Minimal-Massive Intervention in Hospitalized Older Patients with Oropharyngeal Dysphagia: A Proof of Concept Study (1)

Social Frailty is Associated with Physical Functioning, Cognition, and Depression, and Predicts Mortality

Modified Texture Food Use is Associated With Malnutrition in Long Term Care: An Analysis of Making the Most of Mealtimes (M3) Project

Drug Prescriptions in Nursing Home Residents During Their Last 6 Months of Life: Data From the IQUARE Study