Posterior ankle impingement syndrome (PAIS) results from the pinching of anatomical structures in the posterior part of the ankle.

To identify the possible role of imaging in the delayed diagnosis of PAIS and identify key findings on imaging to suggest PAIS in pediatric and adolescent patients.

Data were collected prospectively in patients younger than 18 years of age who underwent arthroscopy after being diagnosed with PAIS. Imaging was reviewed retrospectively by two radiologists, compared with findings in literature and an age-matched control group, and correlated with arthroscopic findings. Pre- and postsurgical Visual Analogue Scale (VAS) pain and American Orthopedic Foot Ankle Society (AOFAS) ankle-hindfoot scores were noted.

Thirty-eight patients (20 females, 18 males), 51 ankles, with an average age of 12.9 years had an average 18-month delay in diagnosis. Twenty-seven of the 38 (73%) patients had previously seen multiple medical providers and were given multiple misdiagnoses. Radiographs were reported normal in 34/47 (72%) ankles. Thirty patients had magnetic resonance imaging (MRI) and findings included the presence of an os trigonum/Stieda process (94%) with associated osseous edema (69%), flexor hallucis longus (FHL) tenosynovitis (16%), and edema in Kager’s fat pad (63%). Although individual findings were noted, the impression in the MRI reports in 16/32 (50%) did not mention PAIS as the likely diagnosis. There was a significant difference in the MRI findings of ankle impingement in the patient population when compared to the control group. Surgery was indicated after conservative treatment failed. All 51 ankles had a PAIS diagnosis confirmed during arthroscopy. At an average follow-up of 10.2 months, there was improvement of VAS pain (7.0 to 1.1) and AOFAS ankle-hindfoot scores (65.1 to 93.5).

PAIS as a diagnosis is commonly delayed clinically in young patients with radiologic misinterpretation being a contributing factor. Increased awareness about this condition is needed among radiologists and physicians treating young athletes. 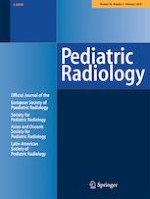 Regarding our 2018 paper titled ‘Magnetic resonance imaging of the pediatric mediastinum’: reply to Mirjalili et al.

Correction to: It’s time to recognize the perichondrium