The online version of this article (doi:10.​1007/​s00125-014-3291-z) contains peer-reviewed but unedited supplementary material, which is available to authorised users.

The AGEs and the receptor for AGEs (RAGE) are known contributors to diabetic complications. RAGE also has a physiological role in innate and adaptive immunity and is expressed on immune cells. The aim of this study was to determine whether deletion of RAGE from bone-marrow-derived cells influences the pathogenesis of experimental diabetic nephropathy. 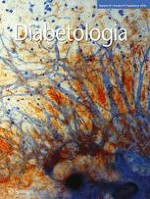