To study the oral health and dental neglect of prenatally buprenorphine-exposed 3-year-old children.

The study consisted of 51 children who as newborns tested positive for buprenorphine in a urine screen. The control group comprised 68 children previously unexposed to narcotics. The dentist examined the children and interviewed their guardians.

More caries and dental neglect were found in buprenorphine-exposed children than in controls. These findings highlight the importance of routine dental appointments, caries screening and preventive care for children in substance-abusing families. 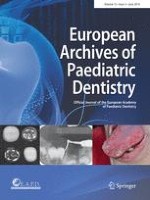 Genetic variation in Ameloblastin is associated with caries in asthmatic children

Biodentine™ material characteristics and clinical applications: a review of the literature

Enamel defects on the maxillary premolars in patients with cleft lip and/or palate: a retrospective case-control study