The molecular mechanism underlying progressive memory loss in Alzheimer’s disease is poorly understood. Neurogenesis in the adult hippocampus is a dynamic process that continuously changes the dentate gyrus and is important for hippocampal plasticity, learning and memory. However, whether impairments in neurogenesis affect the hippocampal circuitry in a way that leads to memory deficits characteristic of Alzheimer’s disease is unknown. Controversial results in that regard were reported in transgenic mouse models of amyloidosis.

These animals show impairment in performance in contextual conditioning and pattern separation tasks following depletion of neurogenesis. Importantly, these deficits were not observed in age-matched APPswe/PS1ΔE9 or δ-HSV-TK mice alone. Furthermore, we show that cognitive deficits were accompanied by the upregulation of hyperphosphorylated tau in the hippocampus and in immature neurons specifically. Interestingly, we observed upregulation of the immediate early gene Zif268 (Egr-1) in the dentate gyrus, CA1 and CA3 regions of the hippocampus following learning in the neurogenesis-depleted δ-HSV-TK mice. This may suggest overactivation of hippocampal neurons in these areas following depletion of neurogenesis. 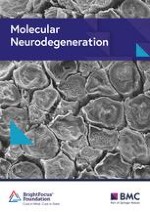