Compared with healthy individuals, participants with type 2 diabetes had more severe depressive symptoms, higher levels of emotional cutoff, and a lower tendency to take an I-position, but had similar levels of trait anxiety, emotional reactivity, and fusion with others (factor analysis revealed these factors were not separable in the current sample and thus were merged into a single construct). Importantly, the severity of depressive symptoms mediated the relationship between emotional cutoff and being in the type 2 diabetes study group rather than the healthy group.

These findings suggest a new perspective on the role of psychological patterns in type 2 diabetes mellitus development and progression. 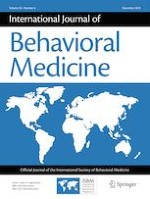 Reduced Attention in Former Smokers with and without COPD

Why Secondary Schools Do Not Implement Far-Reaching Smoke-Free Policies: Exploring Deep Core, Policy Core, and Secondary Beliefs of School Staff in the Netherlands

Coping with Medically Unexplained Physical Symptoms: the Role of Illness Beliefs and Behaviors