Necrophagous beetles of genus Thanatophilus are well recognized as a group of beetles with a high potential utility in forensic entomology. They can be used to estimate postmortem interval (PMI) or validate the value for other groups of insects commonly encountered on human remains, like blowflies (Calliphoridae). However, reliable tools for instar and species identification of their larvae are needed as such information is crucial for allowing accurate PMI estimate. One of the most common species of the genus Thanatophilus in Europe is Thanatophilus sinuatus. This species occurs frequently on human remains and its larvae feed on decaying tissues throughout their development. Therefore, the larvae could become useful bioindicators for forensic entomology, although their current description does not allow reliable instar or species identification. Our goal was to provide morphological characters for species and instar identification of all larval stages of T. sinuatus. The larvae were obtained from laboratory rearing under controlled conditions (20 °C and 16:8 h of light/dark period). Qualitative and quantitative morphological instar and species-specific characters are described and illustrated. Additionally, we report observations of biological and developmental lengths for all stages of the species. We also compared these morphological characters with recent description of T. rugosus and provided an identification key of these two similar and often co-occurring species. We noticed that some characters for instar identification were shared between T. sinuatus and T. rugosus and were confirmed by comparison with larvae of T. dentigerus that they can be applied to other species of the genus. 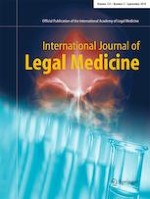 Scanning electron microscopy in the identification of fly artifacts