The gene ATP2C1 is identified as the defective gene in Hailey–Hailey disease (HHD). The nonsense and missense are two common types of mutations and have ,respectively, been detected in many HHD patients. The aims of our study were to identify the pathogenic ATP2C1 abnormality in Chinese HHD patients, and to compare nonsense and missense mutations in vivo to provide further understanding of the molecular and the physiological basis of HHD. The nucleotide sequencing of the ATP2C1 gene was performed in HHD patients, unaffected family members and 100 unrelated individuals. Meanwhile, we detected and analyzed the clinical manifestations, the expression of ATP2C1 mRNA and hSPCA1 protein in the two types of mutations. Three heterozygous mutations were identified, including a previously reported nonsense mutation (R799X), two novel missense mutations (D644G) and (R417K). The results of comparisons between two types of mutations showed that the common clinical features, the similarly low-level expressions of ATP2C1 mRNA and hSPCA1 protein, but the ATP2C1 mRNA expression of nonsense mutation was lower than missense mutation and even less than half the level of normal people. Our findings expand the known spectrum of ATP2C1 mutations in HHD. We supported the haploinsufficiency theory as prevalent mechanism in both types of mutations, and believed that the differences of ATP2C1 mRNA expressions in peripheral blood may relate with the type of mutation and reflect the state of illness of patients. 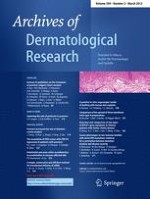 Comparison of the spread of three botulinum toxin type A preparations

German S3-guidelines on the treatment of psoriasis vulgaris (short version)

A simple, noninvasive and efficient method for transdermal delivery of siRNA

Psoriasis increased the risk of diabetes: a meta-analysis