VBM demonstrated significant widening at the lateral ventricles and Sylvian fissures and narrowing of the CSF space at the high convexity/midline areas in iNPH patients, compared to the AD patients and healthy controls (p < 0.05, after correction with a false-discovery rate). In addition, the ratio of the CSF volume in the lateral ventricle/Sylvian fissure area to that in the high convexity/midline area in iNPH patients (3.9 ± 1.2) was remarkably greater than that in AD patients (1.2 ± 0.3) and controls (0.9 ± 0.3; one-way ANOVA, p < 0.001; post hoc Tukey’s test, p < 0.001); we could discriminate iNPH patients from those in the other two groups without any overlap, when using a cutoff level of 1.9.

VBM using CSF objects can be used to delineate the characteristic alteration of the CSF space in iNPH patients, which has been evaluated by visual interpretation. 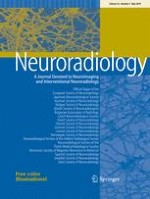 INTERVENTION TO TREAT AND PREVENT STROKE