The aim of this study was to evaluate the relationship between the SYNTAX (Synergy Between PCI With Taxus and Cardiac Surgery) score and left ventricular end-diastolic pressure (LVEDP) measured with an invasive method and with speckle-tracking echocardiography (STE).

The study included 124 patients who underwent cardiac catheterization. LVEDP values and coronary images were obtained for all patients. SYNTAX scores were calculated and separated into three tertiles (SYNTAX = 0, SYNTAX < 22, and SYNTAX > 22). Standard echocardiography and STE were performed on all the patients. Peak LA strain (LAs strain) in ventricular end-systole and LA strain during LA contraction (LAa strain) values were obtained with STE.

LAs strain and LVEDP were observed to be independent predictors of SYNTAX scores. The relationship between LAs strain, LVEDP, and SYNTAX score could be useful in clinical practice. 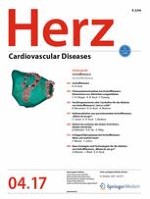