To evaluate the determinants and prognostic value of post-operative maximum urethral closure pressure (MUCP) after AUS implantation in male patients.

The charts of all male patients who had an AUS implantation between 2008 and 2018 at a single center were reviewed retrospectively for an exploratory study. A post-operative urethral profilometry was performed systematically as part of routine daily practice over the study period to assess the post-operative MUCP with the AUS consecutively closed (c-MUCP) and opened (o-MUCP). The difference between c-MUCP and the manufacturer’s theoretical pressure objective determined by the pressure regulating balloon (PRB) was calculated (diff-th-MUCP). The primary endpoint was social continence at 3 months defined as 0–1 protection/day.

The MUCP after AUS implantation in male patients often differs from the manufacturer’s pressure objective. The postoperative c-MUCP might be significantly associated with functional outcomes suggesting that it might be a valuable tool for treatment decision-making. This should be confirmed by larger studies. 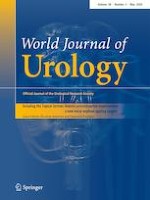 The role of prostatic apex shape in voiding symptoms and urine flow: an exploratory and confirmatory study