Cognitive impairment has been described in people living with HIV and stable on antiretroviral therapy (ART), but has not been monitored in young adults beginning ART with a high burden of cytomegalovirus. We recruited 80 subjects beginning ART with < 200 CD4 T cells/μL in Jakarta, Indonesia. Cognitive function (Z-scores) began low but improved on ART, stabilizing after 6 months with improvements in all domains except memory function. The burden of cytomegalovirus persisting on ART (assessed via antibody levels) correlated inversely with Z-scores (notably memory function) at baseline. In linear mixed models, improvements in Z-scores were influenced by age, education, and CD4 T cell counts. 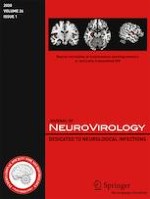 Detection of Zika virus in paired urine and amniotic fluid samples from symptomatic and asymptomatic women and their babies during a disease outbreak: association with neurological symptoms in newborns