Seasonal influenza epidemics occur almost every year, and children under 6 years of age constitute one of the most susceptible groups. While free vaccinations are offered to preschool children in some large cities in China, Xiamen lacks a free vaccination policy and other effective policies aimed at increasing parents’ acceptance of the vaccine. Using the health belief model (HBM), we sought to: (1) investigate the determinants of parents’ intentions to vaccinate their kindergarten children against seasonal influenza if the free policy were implemented, and (2) explore the possible interaction effects between “cues to action” and “perceived susceptibility” and/or “perceived severity.” A total of 1350 parents with kindergarten children were selected by stratified random sampling from half the population in Xiamen, of whom 1211 responded effectively to our survey. Scobit models with testing for interactions among the key concepts of the HBM were used to investigate factors associated with parents’ intentions to vaccinate their children. In total, 85.1% of 1211 parents reported that they were willing to vaccinate their children if free influenza vaccinations were offered, although only 37 children (3.1%) had received influenza vaccination in the previous year, and 261 (21.6%) had been vaccinated since birth. Parents’ perceived susceptibility (AOR = 1.77), perceived benefits (AOR = 3.12), perceived barriers (AOR = 0.38) and cues to action (AOR = 3.54) in terms of childhood vaccination against influenza were significantly associated with their vaccination intentions. The only observed interaction effect was between perceived susceptibility and cues to action (AOR = 1.57), which had additive effects on strengthening parental intentions to vaccinate their children. Our findings can be used as a basis for formulating government strategies aimed at improving influenza vaccination coverage among children in kindergarten and guiding culturally informed primary prevention efforts among their parents. 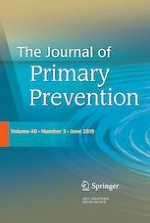 Replication of It’s Your Game…Keep It Real! in Southeast Texas

Meta-Review on the Effectiveness of Classroom-Based Psychological Interventions Aimed at Improving Student Mental Health and Well-Being, and Preventing Mental Illness

Is Weight Discrimination Associated With Physical Activity Among Middle Aged and Older Adults?