The study aimed to assess factors affecting survival of breast cancer patients suffering leptomeningeal metastasis (LM) and to compare survivals in patients with LM as the first and only site of metastases at presentation to patients with LM and metastases in other organs, along with selecting a patient group which had the best survival outcomes. Subject groups consisted of 187 patients consecutively referred during 1999–2015. A Cox proportional hazards model was used to identify factors associated with prolonged survival from LM. The Cox prognostic index was created to identify the group of patients with the most favorable prognosis. Median survival for all patients and for those with LM as the first site of metastases at presentation was 17 weeks and 1 year-survival was 15 and 16%, respectively. Factors beneficially affecting survival were: KPS ≥ 70, older age, biological subtype ER/PR+HER2−, systemic treatment, intrathecal treatment and radiation therapy. Based on these factors, 4 prognostic groups were found, with the most favorable group being 24 LM patients with median survival of 9.6 months. In this group, all patients were treated systemically and all were irradiated, 88% had KPS ≥ 70, about 80% had luminal breast cancer, 75% were treated intrathecally and 58% were more than 53 years old. Out of 4 prognostic groups of patients with LM, the most favorable group was selected. The median survival of breast cancer patients with the leptomeninges as the only site of metastases was comparable to those who had metastases in the leptomeninges and in other organs. 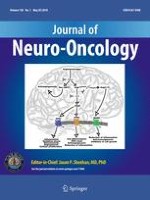 The predictive potential of hyponatremia for glioblastoma patient survival

Surgical treatment of glioblastoma in the elderly: the impact of complications

Phase I trial of dasatinib, lenalidomide, and temozolomide in children with relapsed or refractory central nervous system tumors

Rechallenge with bevacizumab in patients with glioblastoma progressing off therapy