The primary aim of intensive care medicine used to be saving lives. However, intensive care unit (ICU) survival may come at a price: many patients suffer from post-intensive care syndrome (PICS) comprising ICU-related limitations in physical, cognitive, and mental functioning [ 1]. With the recognition of these sequelae of ICU treatment, the focus in outcome research shifted more and more from hospital survival towards long-term survival, health-related quality of life (HRQoL), and functional outcomes [ 2– 8].
Anzeige
Functional outcomes are usually measured with standardized and validated questionnaires, filled in by the patient without interpretation by a clinician [ 9]. These so-called patient-reported outcome measures (PROMs) exist for overall HRQoL as well as for the components of PICS and there is broad consensus to use these in long-term outcome studies [ 10]. Although both patients and researchers agree on the importance of measuring these outcomes, evidence that supports the measurement quality of the various PROMs in ICU survivors specifically is limited [ 11]. Research that involved patients to define relevant outcomes revealed that there is no PROM that covers all relevant aspects of a good outcome [ 12, 13]. In addition, not all symptoms that impact well-being are included in currently used PROMs [ 14].
Some patients state that they do not want to survive critical illness if it results in a poor quality of life, but it appears very difficult to uniformly define poor outcome. There is hardly any evidence that helps to classify overall HRQoL values into acceptable or unacceptable outcome, and researchers arbitrary define poor outcome when conducting long-term outcome studies in ICU patients [ 15]. In addition, for ICU survivors reporting a lower quality of life, it is not fully known how the various components of PICS contribute to a lower quality of life or an unacceptable outcome.
The aim of this study was to investigate the effect of overall HRQoL and of the components of PICS on the risk of a self-reported unacceptable outcome of ICU treatment.

This cohort study was conducted in the ICU of the University Medical Center Utrecht, the Netherlands. This is a tertiary, adult, mixed ICU with 2200 admissions per annum.
Anzeige
All consecutive patients admitted to the ICU between 2010 (start of prospective data collection) and 2016 were eligible.

Patients who had been admitted to the ICU for at least 48 h and who were still alive 1 year after ICU discharge were eligible. If case of readmission, data from the first admission was used. Patients were excluded when under 16 years of age, without a known address, not traceable through the municipal registry, or when they opted out of participation in scientific studies. The institutional review board of the University Medical Center Utrecht approved the study and waived the need for informed consent (UMC Utrecht IRB 10/006). One year after ICU discharge the Dutch municipal population register was consulted to identify and exclude deceased patients. A survey was subsequently sent by mail to all surviving patients.

To reduce bias, patients received several reminders by mail and telephone. Multivariate analyses were applied to correct for known confounders.

The inclusion of five determinants in the multivariate logistic regression model required at least 50 cases (patients with unacceptable outcome) in the study. Recruitment stopped after 5.5 years when 67 cases and a total number of 1453 patients were included.
Anzeige

Patients were divided into three groups according to their response to the acceptable outcome statement: (1) acceptable—patients responding with “agree,” (2) neutral—patients responding with “neutral,” (3) unacceptable—patients responding with “disagree.” A baseline table was constructed to compare the three groups. Differences between the groups were studied using the appropriate tests (Chi-square test or Fisher’s exact test for categorical data, one-way ANOVA for continuous data).
In order to analyze the association between the various PROMs and self-reported unacceptable outcome of ICU treatment, multiple logistic regression was performed. Since the undesirable outcome was unacceptable outcome, the other two groups were merged. To assess the effect of merging these groups, we performed a sensitivity analysis in which we combined the “neutral” respondents with the patients who reported an unacceptable outcome. In addition, we performed a multinomial regression analysis to assess the differences between the three groups.
The strength of the association between the PROMs and self-reported unacceptable outcome was analyzed using the odds ratios from multiple logistic regression models. Since each PROM is measured with a different questionnaire and uses different scales, the questionnaire scores were standardized by converting them into z-scores for the multivariate analyses. The HRQoL and Barthel score were first inverted, so that higher z-scores implied worse outcomes for every PROM.
To correct for differences between the patient groups, we performed three multivariate logistic regression analyses. In the first logistic regression analysis, the effect of the various PROMs on acceptable outcome of ICU treatment was calculated with correction for demographic characteristics such as age, gender, and place of residence. In the second analysis, a correction for demographic and ICU characteristics was applied. ICU characteristics were type of admission, length of stay, comorbidities, APACHE score, highest SOFA score, and use of continuous venovenous hemofiltration (CVVH). The APACHE score, SOFA score, and use of CVVH were chosen as indicators for severity of illness. Comorbidities were classified in three groups: no comorbidity, one comorbidity, and two or more comorbidities. Lastly, a third logistic regression analysis was performed to calculate the individual effect of each PROM by adjusting for the other PROMs in addition to the demographic characteristics and ICU characteristics. Because overall HRQoL, as measured in the EQ-5D, includes all the components of PICS, overall HRQoL was left out of the final analysis.
Anzeige
Since we calculated 19 different p values for the comparison of the study outcomes, the significance level was modified using the Bonferroni correction to less than 0.003 (0.05/19). The odds ratios (ORs) obtained with the logistic regression analyses are presented with 99 percent confidence intervals (99% CI).
As post hoc analysis, the EQ-5D index values were analyzed to define a cutoff point in EQ-5D index values that indicates a self-reported unacceptable outcome of ICU treatment. A box plot and ROC curve were constructed to compare the distribution of EQ-5D index values in the two groups.
We also performed a post hoc logistic regression analysis to assess the association between each EQ-5D domain (mobility, self-care, usual activities, pain, mood) and unacceptable outcome of ICU treatment.

A flowchart of the study population enrollment is presented in Fig.  1. During the 6-year study period 2294 patients were admitted for at least 48 h and survived at least 1 year. The survey was returned by 1632 patients (71%). Complete responders ( n = 1453, 89%) were defined as patients who answered the question about acceptable outcome and all the questions of the EQ-5D.
×
Anzeige
Within the complete responders, 1073 patients (74%) agreed with the statement that their current condition is an acceptable outcome of ICU treatment, 313 (22%) responded neutral, and 67 patients (5%) disagreed with the statement.
Characteristics of the participants are presented in Table  1. Gender, place of residence, and highest SOFA score differed significantly across the three groups.

Although there is a strong association between low overall HRQoL and self-reported unacceptable outcome of ICU treatment, ICU patients with low overall HRQoL may still consider their outcome acceptable. The mental component of PICS, but not the physical and cognitive component, is strongly associated with self-reported unacceptable outcome of ICU treatment 1 year after discharge.

On behalf of all authors, the corresponding author states that there is no conflict of interest.

The institutional review board of the University Medical Center Utrecht approved the study and waived the need for informed consent (UMC Utrecht IRB 10/006).
Open AccessThis article is distributed under the terms of the Creative Commons Attribution-NonCommercial 4.0 International License (http://creativecommons.org/licenses/by-nc/4.0/), which permits any noncommercial use, distribution, and reproduction in any medium, provided you give appropriate credit to the original author(s) and the source, provide a link to the Creative Commons license, and indicate if changes were made. 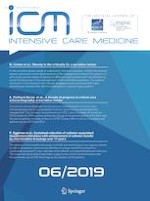 Catheter-associated bloodstream infection rates: how low can you go?

Obesity in the critically ill: a narrative review

Correction to: A decade of progress in critical care echocardiography: a narrative review