The optimal surgical strategy for patients presenting with colorectal liver metastases has yet to be determined. Short- and long-term outcomes must be considered if simultaneous resection of primary and liver metastases is to gain acceptance. We examine the prognostic value of patient and tumour characteristics in predicting short- and long-term outcomes following simultaneous resection for synchronous disease.

There were no postoperative deaths. The most common complications were atrial fibrillation (seven patients) and pneumonia (seven patients). Mean hospital stay with an uncomplicated postoperative recovery was 11 days versus 17 days with complicated recovery. Age (p = 0.015), ASA grade (p = 0.010) and POSSUM score (p = 0.032) were associated with postoperative complications. No pathological characteristics of the primary or secondary tumours related to surgical morbidity. Median follow-up was 37 months (5–87) during which 24 patients died, 23 from cancer. Twenty-seven had disease recurrence. N stage of the primary (p = 0.035), high-risk Petersen Index of the primary (p = 0.010) and Clinical Risk Score ≥ 3 (p = 0.005) were associated with poorer recurrence-free and cancer-specific survival.

Post operative morbidity was determined by patient factors rather than operative or tumour characteristics. In addition to the Clinical Risk Score, pathological characteristics of the primary are important determinants of long-term outcome following simultaneous resection for synchronous disease. 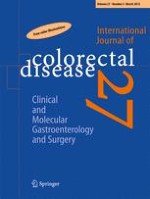 Trimodal endoscopic imaging for the detection and differentiation of colorectal adenomas: a prospective single-centre clinical evaluation