Respiratory rate (RR) is recognized as an important clinical parameter which, in practice, is measured in a number of different ways depending upon the clinical setting. The measurement may be performed continuously—for example using end-tidal CO 2 (ETCO 2) monitors, EKG-based trans-thoracic impedance (TTI) systems, nasal thermistors, abdominal and chest bands—or intermittently—for example using manual counting during patient observation. Continuous measurements involve specialized and/or obtrusive equipment and hence RR is normally available from these devices only when they have been specified for another clinical purpose. In contrast, manual counting is a methodology that clearly eludes these technological issues. However, it is an intermittent spot check made during patient observation and not a continuous measurement. Therefore, there remains a clear clinical need for an alternative automated, continuous methodology for the calculation of RR. An ideal solution would be one that is continuous, non-invasive, simple to operate and unobtrusive to the patient.
One such technology candidate that is already currently accepted in clinical practice is pulse oximetry. Recent evidence indicates that the measurement of respiratory rate from the pulse oximeter signal, or photoplethysmogram (PPG), may be possible. Indeed, numerous groups have previously demonstrated that respiratory-related fluctuations in the PPG signal are both physiologically plausible and their measurement, technically attainable. Technical solutions to their measurement include: inspection of the respiratory oscillations in the filtered PPG [ 7, 9, 16– 19]; frequency spectra-based approaches [ 10, 21] independent component analysis [ 22] Short-Time Fourier Analysis (STFT) [ 20]; neural networks [ 8]; variable frequency complex demodulation methods (VFCDM) [ 2, 4]; autoregressive models [ 5, 6, 11]; and approaches based on the continuous wavelet transform (CWT) by our own group [ 3, 12– 15]. These studies have ranged in cohort size from 4 to 36 subjects and have comprised a wide range of subject types including healthy adult volunteers, patients undergoing abdominal procedures, chest clinic patients, children, and neonates. Protocols have included subjects breathing freely, subjects asked to breathe at a specified rate or rates, and mechanically ventilated patients. A range of RR verification signals have also been used including nasal thermistors, facemask flowmeters, ETCO 2 signals, TTI signals, chest and abdominal bands, manual counting by an observer and manual self-counting by the patient. Thus, there is now a considerable body of evidence supporting the potential feasibility of such a monitoring technology.
Anzeige
Despite these previous efforts, to date, a viable methodology meeting the aforementioned desired criteria for a respiratory rate monitoring device has yet to be developed. However, this cumulative body of evidence strongly suggests the possibility that deriving both pulse oximetry and RR from a single combined sensing system may represent an effective solution. A technological approach providing these metrics from a single sensor would yield tremendous clinical utility in an efficient manner. Therefore, the purpose of this study was to develop a robust algorithm to extract respiratory rate from a standard pulse oximetry system. To this end, we have further developed our CWT-based methods to a point where they are now incorporated within a fully-functional algorithm tailored to mimic operation on a monitoring hardware platform. This paper emphasizes the holistic approach to the development of an algorithm which will provide a robust determination of Respiratory Rate of clinically relevance to the end user. This requires a strong pre-processing module feeding into a core method of information extraction (the Analysis Engine), from which a value is determined and fed into a post-processing methodology fit for purpose. Particular emphasis in the algorithmic design has been placed on the weighted averaging and logical decision making processes required to determine the validity of the computed rate and its use in updating the respiratory rate that would be reported to the clinical end-user. The algorithm has been developed using patient data from a wide range of clinical settings and healthy volunteer data. As part of the algorithm validation process we have tested its performance on data from a large-scale, in-house study of healthy adult volunteers. Results from this study are reported herein.

In this state all prior (averaged) history of the Respiration Rate value is ignored. The Respiration Rate value is only reported to the user when the confidence metrics are all below predetermined thresholds. These thresholds get more lenient as time progresses. NO POST is the start-up state and in order to post on the first measurement from the analysis portion of the algorithm the confidence must be very high. As time progresses the confidence threshold decreases as more and more data is averaged in.
Note that in all states described above, the entire algorithm is reset (returns to NO POST) if the oximeter algorithm reports a pulse rate or SpO 2 of zero (i.e. a dropout) or the sensor is disconnected. The use of a state machine driven logic allows the algorithm to optimize the reporting of a stable rate which is robust to noise while retaining optimal accuracy.

Subsequent to IRB approval, the study was conducted within the clinical laboratory at Covidien’s Respiratory and Monitoring Solutions facility in Boulder, CO, USA. A cohort of 139 healthy adult volunteers were recruited for the trial (58 Male and 81 Female). Participants ranged in age from 18 to 67 years with a mean age of 35 years and standard deviation of 12 years. Body mass indices ranged from 17 to 51 with a mean of 25 and standard deviation of 5. Heart rate was monitored during the trial and these ranged from 43 to 113 beats per min with a mean of 66 beats per min and standard deviation of 10 beats per min. These parameters are listed in Table  1.
Table 1
Participant characteristics
Yr years, BMI body mass index, HR heart rate, bpm beats per min
All participants were apparently healthy and free of known, overt cardiovascular, pulmonary, and metabolic diseases. Of those included, a small number had pre-existing conditions such as asthma, sleep apnea, thyroid issues, depression, hypotension and hypertension. Further study exclusion criteria were as follows: (1) Contact allergies that may cause a reaction to standard adhesive materials found in the sensors used, (2) Abnormalities that may prevent proper application of the pulse oximeter probe, and, (3) Previous injury or co-morbidity to fingers or hands that may alter blood flow and vascular supply.

The data were acquired using a standard Nell-1 oximeter OEM module with a Nellcor Max-A disposable probe attached securely to the index finger of the right-hand. The Nell-1 module is a standard oximeter board which can be found in many of the multiparameter montoring machines found in hospital. The RR OXI algorithm works from the native device sample rate of 75.7 Hz of this board. The board has a low pass filter at 5.5 Hz with full DC retained for oximetry purposes. A Datex-Ohmeda CardioCap/S5 device was used to record an end-tidal CO 2 signal from the patient using a nasal cannula. Once the subject was comfortable with the equipment, the PPG signal was acquired over a duration of approximately 8 min while subjects were asked to relax and breathe naturally.
Data integrity was ensured through training of study personnel prior to data collection and explicit documentation of compliance with study procedures during all data collection. All study devices were used according to specification and all sensors were placed properly according to the device manuals and study instructions. Data were acquired using commercially available pulse oximeter boards with fully validated firmware and embedded software. Trained study personnel observed all data collection and documented adherence on an individual Case Report Form for each subject. Case Report Forms were subsequently monitored by a Clinical Research Associate to verify completeness and accuracy prior to the incorporation of the data into analysis. Data analysis was performed in accordance with documented procedures and reviewed for accuracy by a Data Review Board.

All data are presented as mean ± standard deviation. Pearson-product moment correlation coefficients were employed to determine the relation between RR oxi and \( {\text{RR}}_{{{\text{ETCO}}_{ 2} }} \).

The main finding of this study is that the algorithm developed is able to robustly calculate respiratory rate from a standard pulse oximetry system during spontaneous breathing in healthy adults. Importantly, this was accomplished using a single sensor. Thus, these results demonstrate a unique, clinically useful approach to monitoring multiple respiratory variables in a continuous, non-invasive, and easy to use manner.
The drive to develop a viable technology has gained increasing momentum over recent years as more sophisticated signal processing methods have been developed. Despite previous efforts to date, a viable methodology satisfying the aforementioned desired criteria for a respiratory rate monitoring device has yet to be developed. The success of this endeavor requires the following three components: (1) the recognition of the multi-faceted manifestations of respiratory modulations within the PPG and the complex interplay between them; (2) the implementation of appropriate advanced signal processing techniques to take full advantage of this information; and (3) the post-processing infrastructure to deliver a clinically useful reported respiratory rate to the end user.
Studies reported in the literature generally fail to properly address one or more of the above criteria, and most fail to address any of these criteria. In fact, many investigators concentrate on a single modulation type (i.e. RSA, pulse amplitude, or baseline). We note also that others have attempted to implement a CWT-based method, but it appears that the implementation differs greatly from our own. Chon et al. [ 2] reported CWT-based RR results for pulse amplitude and RSA components separately (i.e. not a combined measure). Fleming and Tarassenko [ 6] appear to have manually selected an optimal modulation transform, and report a mean error of 1 br/min from a limited study of 7 subjects. In addition to the CWT implementation itself, these studies fail to incorporate the pre- and post-processing components of our CWT algorithm which are significant and necessary part of its infrastructure to ensure optimal performance.
Anzeige
Recognizing the above three tenets, we have developed an algorithm for the derivation of respiratory rate from signals available on a standard, commercially available pulse oximeter hardware platform. The oximeter-derived respiratory rate, RR oxi, was derived from data collected from a 139 healthy subject cohort and compared to a reference rate, \( {\text{RR}}_{{{\text{ETCO}}_{ 2} }} \). We found excellent agreement between the two with an RMSD of 1.16 br/min (mean difference of −0.23 br/min). It is worth also restating (from the Introduction) that the algorithm has been developed using a wide range of in-hospital patient data and healthy subject data (including various sensor sites and patient positions, breathing protocols, patient disease states and a wider range of respiratory rates), and so is not tuned specifically for healthy subjects. This was done to mitigate against overtraining on healthy subject data and to ensure that the algorithm has the ability to cope with as wide a range of situations in the field as possible. Note that we inspected the subject case review forms (CRFs) to determine whether any of the 139 subjects had a pre-existing respiratory problem and found that 6 had asthma. We examined their individual results and found that their RMSD’s ranged from 0.4 to 1.3 and that they did not appear to exhibit different behaviour from the rest of the population.

Currently, pulse oximeters use the differential absorption of red and infrared light between oxygenated hemoglobin and deoxygenated hemoglobin to provide a measure of oxygen saturation; heart rate is also provided. These devices do not currently measure respiratory rate, and will only detect inadequate respiration after hypoxia has occurred. Due to the nonlinear relationship between SaO 2 and PaO 2, where SaO 2 may drop dramatically at first with little change in SaO 2 [ 23], and the significant increases in circulatory times that may be exhibited during extreme monitoring conditions such as during hypotension, hypoperfusion and hypothermia [ 24], pulse oximetry is often considered a lagging indicator of evolving respiratory complications, thus limiting its efficacy in this domain. The combination of pulse oximetry with respiratory rate using a single sensor, may provide earlier indication of evolving respiratory compromise. We believe the RR oxi algorithm would provide this earlier indication by offering the capability to monitor respiratory rate via a sensor that is routinely attached to patients in many clinical situations, thus potentially enhancing patient safety with combined respiratory rate and arterial oxygen saturation monitoring. 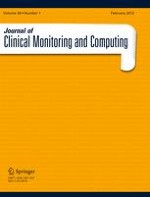